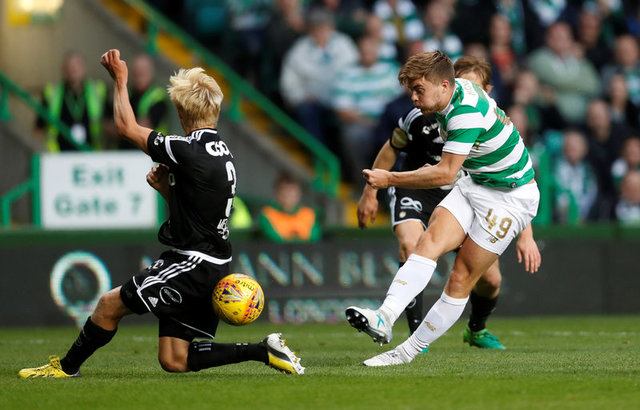 Celtic midfielder James Forrest has revealed that his side are hoping to improve on last season’s impressive results against Rangers during the first Old Firm match of the season.

Brendan Rodgers’ squad will head to the Ibrox on Saturday afternoon to face their Glasgow rivals for the clubs’ first Premiership meeting of the current campaign.

The Hoops had a remarkable 2016-17 campaign and secured a 5-1 win over the Light Blues during their first Old Firm clash of the 16/17 campaign.

Rangers failed to take away three points from any of their meetings with the Invincibles last year, but Forrest and his team mates are aiming even higher this season.

“We know it is going to be hard and we want to come out with a win,” Forrest explained, as quoted by the Glasgow Evening Times.

“It is about getting better and doing even more. We will be going there and looking for another positive result.

“That gives us confidence – the record we had against them last season.

Before heading to the Ibrox, Brendan Rodgers’ side will head to Dens Park to meet Dundee in the League Cup on Wednesday evening.

The Hoops have had a successful run across most competitions so far, but recently suffered a devastating 5-0 defeat to Paris Saint-Germain in their opening group stage match of the Champions League.

Celtic will undoubtably still be confident going in to the Old Firm match next weekend after securing two 5-1 victories as well as a draw and another win over Rangers last year.

However, Rangers boss Pedro Caixinha had a busy time during his first transfer window with the club and made eight new additions throughout the summer who Celtic are yet to meet, which means the Old Firm game could have a completely different dynamic to last year.

In other Celtic news, Dembele has delivered his verdict on the competition with Edouard.