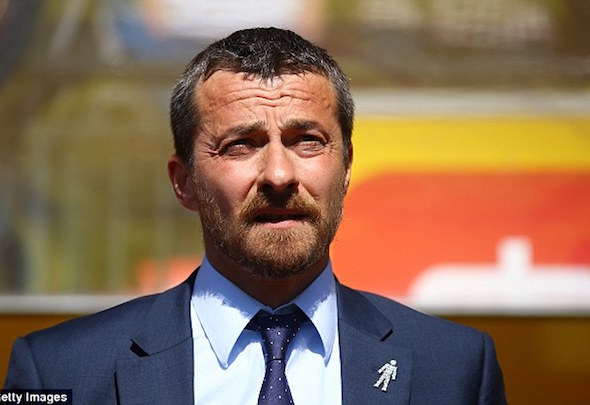 EXCLUSIVE By Editor Wayne Veysey| Former Evening Standard, Press Association and Goal chief correspondent with 17 years experience of breaking big stories, including exclusives like this
Follow me on Twitter @footyinsider247
Fulham have made an approach for Stanislav Jokanovic but have lined up Tony Mowbray as a back-up option in case talks break down, Football Insider sources understand.
The Londoners have turned their sights on Maccabi Tel-Aviv boss Jokanovic after his team were eliminated from the Champions League last week.
A senior Fulham source has told Football Insider that the club have made contact with Maccabi about holding formal talks with Jokanovic.
Discussions are set to take place about a deal that would take Jokanovic to Craven Cottage although the Championship club have taken the precaution of lining up Coventry manager Tony Mowbray as a back-up candidate.
Fulham chiefs have struggled to find a replacement for Kit Symons and, as revealed by Football Insider, appointed Stuart Gray as caretaker manager earlier this month.
A deal was agreed in which Gray will stay on as a coach at Craven Cottage and work alongside the new manager if he did not land the manager’s job on a full-time basis.


Jokanovic guided Watford to Premier League promotion last season and his stock is still very high in England. He would also like the chance to work in this country again.
Fulham have already held talks with a number of managers but suffered a series of setbacks as discussions with Steve Clarke, Gary Rowett, Nigel Pearson and Mark Warburton collapsed.
Fulham owner Shahid Khan is keen to appoint a head coach who can work under transfer chief Mike Rigg.