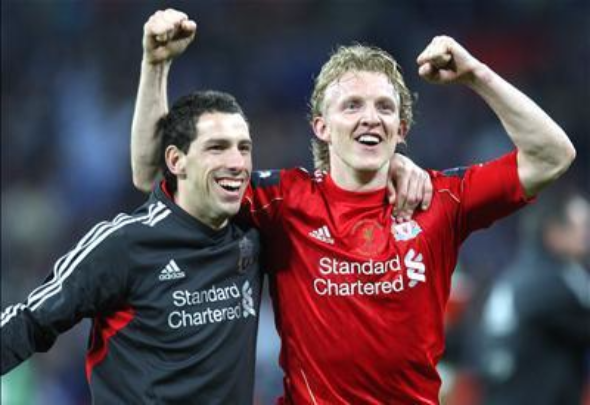 Dirk Kuyt has announced his retirement from professional football at the age of 36 years old following Feyenoord’s Eredivisie triumph – and Liverpool fans have paid tribute to the attacker.

Kuyt, 36, rounded off his career in fantastic fashion, scoring a hat-trick in a 3-1 over Heracles to pip Ajax to the Eredivisie title in the final fixture of Holland’s top flight.

Feyenoord revealed on their website that their captain and former Liverpool star would be retiring from professional football after spending two years with the Rotterdam club.

Versatile forward Kuyt enjoyed a trophy-laden career including Dutch and Turkish league titles, as well as an English League Cup with Liverpool during his six-year star with the Reds.

Moving to Anfield in the summer of August 2006, Kuyt remained with the Merseyside giants until 2012 and scored a huge 71 goals as well as providing 40 assists in 286 outings.

Liverpool fans applauded the former Fenerbahce and FC Utrecht forward for his time with the Reds, after his current side announced his news.

So @kuyt retires. Expecting flood of tributes now – every one of them richly deserved. @LFC legend who gave all. And what a way to go out!

Dirk Kuyt, the man for the big occasion, has retired from football. #legend #LFC 🔴 pic.twitter.com/IRRr9c3qL8

@Kuyt is an absolute legend. A perfect way to end off such an admirable career #LFC

@Kuyt thank you for all the memories! Ending your illustrious career on a high. Enjoy your retirement. You will forever an Lfc legend.

Dirk Kuyt is surely the most underrated Liverpool player of recent years, he gave absolutely everything to us #LFC

Throughout his career, Kuyt made a huge total of 782 senior appearances, having a hand in 450 goals, scoring 281 himself and providing 149 assists in all competitions.

Kuyt will now remain with Feyenoord in technical-management role.

In other Liverpool news, here are three reasons why the Reds should sign this Manchester United defender.