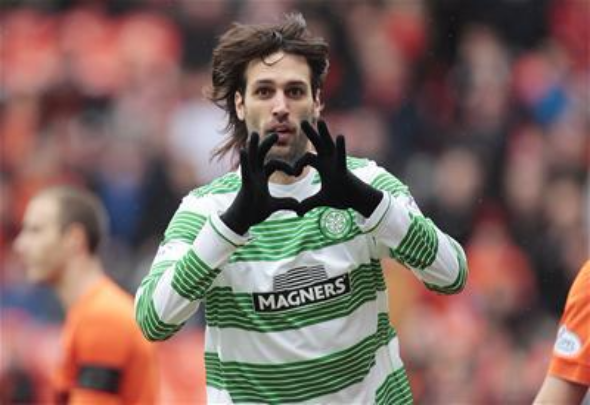 Georgios Samaras has revealed that he’s “not ready” to return to Glasgow after leaving Celtic for West Brom just two years ago.

The 31-year-old forward enjoyed a six-year stay at Celtic Park after leaving Manchester City for the Scottish giants in 2008.

He built a strong connection with the Hoops, but has stated that it’s “difficult” for him to speak about his past and that he now can’t return to Scotland’s capital.

“It’s a very strong connection and it’s the reason I can’t come back to Glasgow to watch a game,” started Samaras on the official Celtic website.

“I’m not ready to come back to Glasgow as a fan, which I am, and watch the team. It’s difficult for me to speak about my past as it’s only two years. I love Celtic and I always will.

“I am proud to have played over 250 games for the club and to have played for the team for seven years, winning leagues and cups and had great nights in the Champions League.

Samaras has played for a multitude of clubs during his 14-year professional career, which includes Heerenveen, Manchester City and most recently Rayo OKC.

However, he has not stayed at a club for as long as he did at Celtic, or made anywhere near the same amount of appearances.

He played key roles in helping Celtic to four league titles and was even named the supporters’ player of the year in the 2012-13 campaign.

The Scottish giants are now preparing for a home clash against La Liga giants Barcelona.

They will be looking to for a third-placed finish in their Champions League group, which will ensure a place in the knockout rounds of the Europa League.

In other Celtic news, here are three reasons why the Hoops can beat Barcelona.