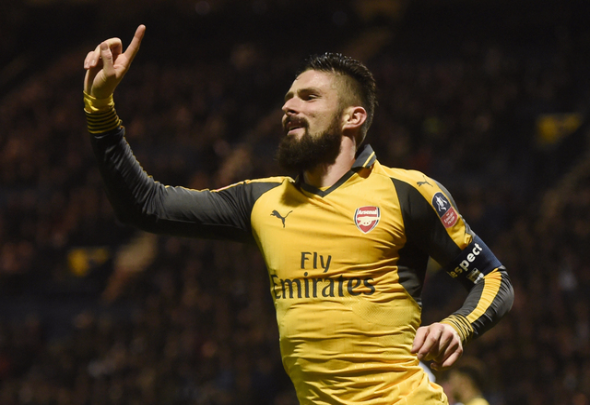 Olivier Giroud, Santi Cazorla and Thomas Muller would be among the casualties of a starting line-up comprised of the best Arsenal and Bayern Munich players.

The Gunners travel to the Allianz Stadium on Wednesday night for the first leg of their Champions League last 16 tie.

Arsene Wenger’s side will be hoping to get a positive result against Bayern to take back to the Emirates Stadium for the return leg.

The north London club have a torrid record in the Champions League and have been knocked out in the last 16 for the past six consecutive seasons.

Meanwhile, Bayern are among the favourites to win the European crown, but did finish second behind Atletico Madrid in the group stages.

Arsenal’s long-term absentee through injury Cazorla would be omitted from the combined XI even if he was fit, with competition for the midfield places extremely tough.

Attackers Giroud and Muller would also be left to warm the bench in the star-studded line-up.

Bayern goalkeeper Manuel Neuer would be the obvious choice to start in the net as he is regarded as one of the world’s best, meaning Petr Cech and David Ospina would miss out.

Arsenal’s pacy defender Hector Bellerin would get in at right-back, while German icon Philip Lahm misses out after recently announcing his retirement for the end of the season.

Laurent Koscielny and Mats Hummels would make up a formidable centre-back partnership, with Shkodran Mustafi, Javi Martinez and Jerome Boateng offering cover on the bench.

Germany international Boateng has been absent over the past couple of months with a shoulder injury and is doubtful for the Champions League clash with Arsenal.

Bayern ace David Alaba would comfortably get the nod at left-back ahead of Nacho Monreal at Kieran Gibbs.

The combined XI’s midfield would be made up of Thiago, Arturo Vidal and Mesut Ozil, with all three players extremely technically assured.

The frontline would see the likes of Douglas Costa, Theo Walcott, Danny Welbeck, Kinglasy Coman, Giroud and Muller also miss out to show the strength in depth of both teams.

Arjen Robben would occupy the right flank and he has been directly involved in 14 goals in just 19 appearances this season, despite coming to the latter stages of his career.

Arsenal’s talisman Alexis Sanchez would cause chaos on the left flank and he has also been in spectacular form this campaign, scoring 19 goals and supplying 16 assists in just 32 appearances across all competitions.

That leaves Bayern’s striker Robert Lewandowski to lead the line and he has managed 23 goals in 29 appearances this season.

In other Arsenal news, Rio Ferdinand has urged the club’s player to sign a new deal.