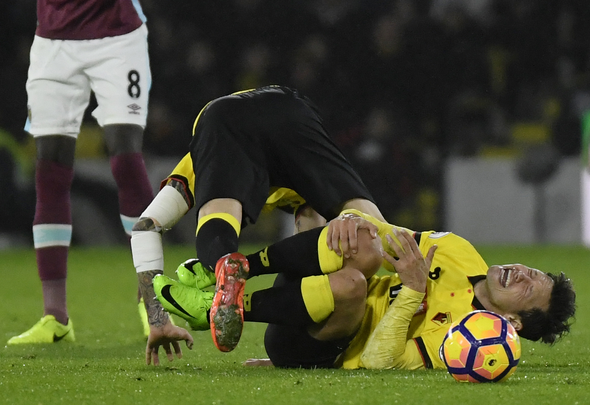 David Gold has sent a heartfelt message to crocked attacker Mauro Zarate after he was stretchered off the field during West Ham’s draw against Watford.

Zarate, 29, ruptured his anterior cruciate ligament against Gold’s Hammers on Saturday evening, during the 1-1 tie at Vicarage Road in just his third game since joining the Hornets.

Posting on his personal Twitter account, co-owner Gold sent his best wishes to the Argentinian forward, describing him as “one of the nicest men in football”.

Good luck to Mauro Zarate one of the nicest men in football. dg pic.twitter.com/5LSHWzKGuE

The Fiorentina loanee was on the books at West Ham for 18 months following a permanent move from Velez Sarsfield back in the summer of 2014.

However, the versatile attacker’s stay in east London was not a successful one, subsequently seeing Zarate leave on loan to QPR.

Leaving in January 2016 to join Fiorentina, Zarate returned to the Premier League last month with Walter Mazzarri’s side but won’t feature for the Hornets again this season.

In other West Ham news, fans have reacted to Zarate’s injury.