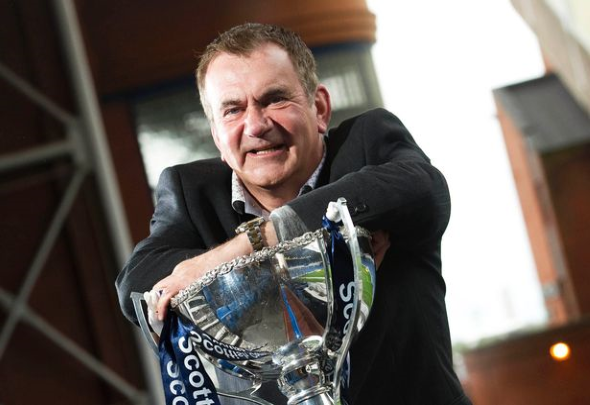 Former Rangers striker Gordon Dalziel has revealed he wanted to know why his defenders didn’t put Gers winger Andrei Kanchelskis “into the stand” after he famously showboated against Ayr United in the Scottish Cup semi-final at Hampden in 2000.
The Light Blues destroyed Dalziel’s side 7-0 in one of the most one-sided semi-finals in recent memory and Kanchelskis at one point stood on the ball and saluted leading to Dalziel’s furious reaction.
Kanchelskis had another famous showboating moment with the Gers when he ridiculously jumped in the air and piroutted where he stood in a Scottish Premiership clash with Kilmarnock at Ibrox.
Dalziel also admitted he told full-back John Robertson he would have “thought more of him if he had battered him.”
“That will stick in my mind for a long, long time,” Dalziel said, as quoted by the Evening Times.
“Part of me wanted to applaud him and say what a magnificent piece of skill it was – and I don’t think he was being disrespectful. At that stage they were so comfortable he just wanted to entertain and sometimes you need a bit of showboating.
“It’s not nice to be on the other end of it, though, and that’s what the other part of me was feeling at the time.
“After the game, I concentrated on full back John Robertson, giving him both barrels in the dressing room, asking him why he didn’t put Kanchelskis into the stand and telling him I’d have thought more of him if he had battered him.”
Kanchelskis joined the Gers for £5.5million from Fiorentina in 1998 and spent three years with the Ibrox giants before joining Manchester City on loan in 2001 then completing a permanent move to Southampton the following year.
During his time with Rangers, Kanchelskis won two Scottish titles and three Scottish Cups.
Kanchelskis made almost 100 appearances for the Light Blues but despite early success, he struggled to hold down a regular place in the starting XI under Dick Advocaat or his successor Alex McLeish.
In other Rangers news, it can be revealed that a key first teamer has sensationally asked to leave after the board failed to stick to their promise of giving him a new deal during the transfer window.
Don’t miss out on breaking and exclusive Rangers news by clicking here for our brilliant 24/7 updates on Facebook, Instagram and YouTube.