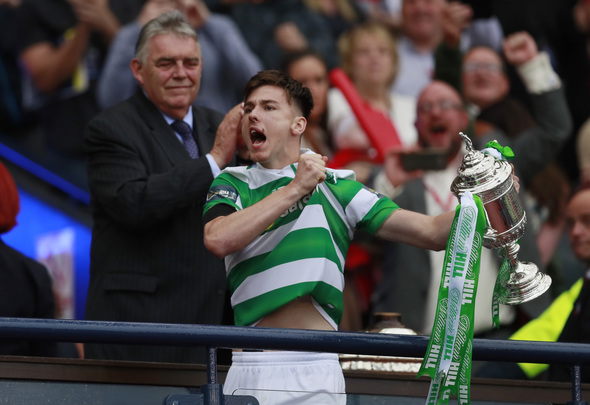 Celtic legend Tom Boyd has admitted that he has been blown away by the quality of Kieran Tierney and claimed the full-back has “everything in his locker” to have a career at the highest level.

Tierney has been a revelation since breaking into the Hoops side under Ronny Deila and has made himself indispensable to Brendan Rodgers in the Northern Irishman’s time at the Parkhead helm.

The 20-year-old has featured in a variety of positions due to an on-going injury crisis for Celtic this season and has impressed in all of them.

Tierney’s willingness to get forward in support of the more attack-minded players has become a trademark of his game and his link-up play with Scott Sinclair down the left flank for the Bhoys has been a big factor in the clubs’ success.

Tierney has also forced his way into the right-back position with Scotland after his performances for the Hoops as Brendan Rodgers’ side won an undefeated domestic treble last season.

“First and foremost, he’s a proper defender,” Boyd told CelticTV, as quoted by Inside Futbol.

“He can do the odd mistake, he’s a young boy and we’ve all done that.

“He has done everything he can to get to this stage.

“The qualities he has got both defensively and attacking-wise [are great].

“He has got everything in his locker to go further.”

Tierney has even captained Celtic on a few occasions this season – highlighting the massive faith Rodgers has in him – and has been a standout for the Hoops so far.

The Isle of Man-born star has picked up eight caps for Scotland and his emergence for the Tartan Army was one of the few bright spots in a disappointing World Cup qualifying campaign.

Tierney has reportedly been attracting interest from clubs in the Premier League recently although the 20-year-old is unlikely to want to leave his boyhood heroes while they competefor trophies and compete in the Champions League.

In other Celtic news, it has been confirmed that this defender has been ruled out for a number of weeks in a fresh injury blow.