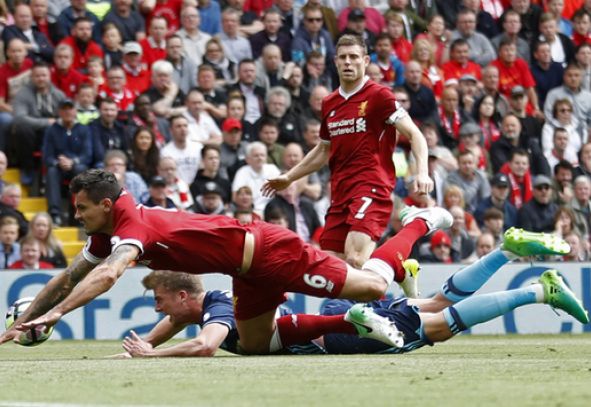 Former Premier League referee Graham Poll believes Liverpool were fortunate to go unpunished in the win against Middlesbrough on Sunday.

Middlesbrough were denied a penalty in the first-half when Liverpool defender Dejan Lovren was adjudged to have fouled Patrick Bamford, only for referee Martin Atkinson to wave play on.

The call was not challenged by assistant referee Adam Nunn, but Poll believes that Lovren’s ‘clumsy’ tackle should have been sent-off for his foul on the Middlesbrough attacker.

To compound the misery for the visitors, Liverpool took the lead on the stroke of half-time through Georginio Wijnaldum, with Philippe Coutinho and Adam Lallana later contributing to a 3-0 win.

The result saw Liverpool successfully fight off competition from rivals Arsenal for a place in the Premier League’s top four, and a place in the Champions League for next season.

But it could have been a different story had Liverpool conceded a penalty and been reduced to 10-men, but while he criticised the call, Poll does not believe that Atkinson stands at fault for handing the Reds a route into Europe.

In his column for the Daily Mail, he said: “It was a clumsy foul which started outside the penalty box but continued inside meaning a penalty would have been the correct decision.

“At full speed it appeared clumsy but replays showed it was a foul and with Bamford being denied the opportunity, Lovren would have been sent off and Liverpool down to 10 men and facing a penalty kick.

“To say that Atkinson assisted Liverpool’s passage into the Champions League would be wide of the mark in a season of 38 games with thousands of close calls, teams know their fate is in their own hands not the referees.”

Liverpool held a narrow one-point advantage over rivals Arsenal heading into the tie at Anfield, but went under immense pressure when the Gunners took the lead against Everton through Hector Bellerin.

But with Liverpool simply needing a win against a relegated Middlesbrough side that had mustered just 27 league goals all season.

The statistic showed as Liverpool proved the dominant of the two sides in the attacking third, ending their season on a high with another impressive win.

In other Liverpool news, here are things we learned about Liverpool during the win.