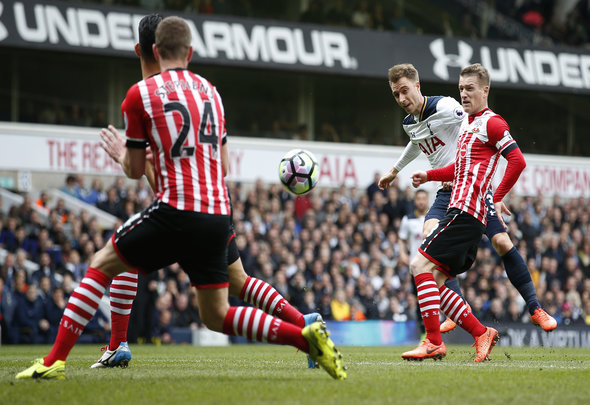 Graham Roberts has backed Tottenham ahead of their Premier League game against Swansea and stressed the importance of first teamers Christian Eriksen and Mousa Dembele.

Spurs travel to the Liberty Stadium for a league clash and have emerged as serious title contenders for Chelsea.

Mauricio Pochettino’s men have won their last five consecutive matches across all competitions, with four of them coming in the league.

They are now seven points adrift of table toppers Chelsea and will hope to intensify the pressure with another three points agains the Swans.

Former Spurs player Roberts has backed the pair to continue their good form against Swansea on Wednesday night.

“Man of the moment for us Christian Eriksen has a fantastic record v Swansea I think he will do it again. And with Moussa Dembele on fire we can do it,” Roberts wrote on his personal Twitter account.

Man of the moment for us @ChrisEriksen8 has a fantastic record v swansea I think he will do itagain. And with @mousadembele on 🔥we can do it

Roberts believes that Eriksen can continue his recent form against Swansea in the upcoming clash as he has scored four times in his last three league appearances against them.

The 25-year-old attacking midfielder has been in sparkling form this campaign and is an under-rated member of the starting line-up.

He has made 39 appearances this season across all competitions, scoring 10 goals and supplying 16 assists in return.

Meanwhile, midfielder Dembele continues to be an ever-present in Pochettino’s side and has been in great form recently.

He could have even further pressure on his shoulders against the Swans after injuries to Harry Winks and Victor Wanyama.

In other Tottenham news, Paul Merson has predicted the upcoming clash against Swansea.