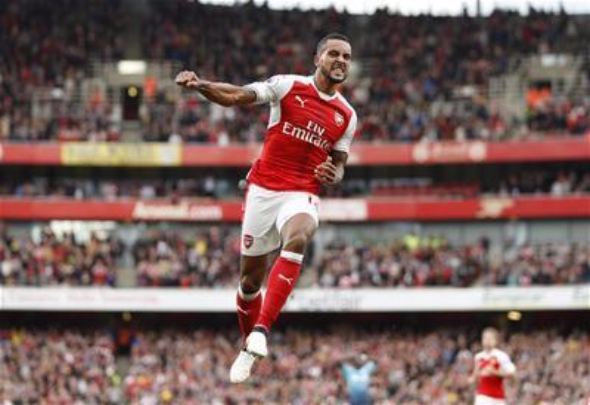 Long time Arsenal servant Theo Walcott has finalised his move to Everton, for a fee reported to be £20million.
The 28-year-old has enjoyed a 12-year career with the Gunners, signing from Southampton FC back in 2006 as a fresh faced 16-year-old.
Walcott won four majour honours during his time at the Emirates, including two FA Cup victories, but has found regular football hard to come by this season.
The Arsenal faithful are going to miss the lightning fast winger, who earned over 300 appearences for the Gunners.
Walcott himself announced the move on his personal Twitter page on Wednesday afternoon.

Happy to confirm I have today joined @everton 🔵⚪ #EFC pic.twitter.com/BSoTJgRXq2

Arsenal fans took to Twitter to wish the England international luck in his new venture:

Theo Walcott signs for Everton. Good luck at Goodison park, THEO. That two nil fingure gesture vs Spurs will remain one of those moments in football. pic.twitter.com/KjEcihorRj

Good luck pal. Will miss ya

All the best Theo. Thanks for the years you gave to arsenal

Shocked!! @theowalcott gone to #Everton didn't even know u were thinking of leaving us 😢😢 #Arsenal #Football ⚽ xx

Walcott made history by being the youngest English player to go to a World Cup back in 2006, yet did not feature at the tournament.
However, the 28-year-old went on to have a good England career, earning over 40 caps.
One of the most infamous Walcott moments in Arsenal history is the ‘2-0’ gesture he posed after sustaining an injury against Tottenham.
Everton are inheriting a wonderful talent, who has never really reached his full potential, and his pace will complement an already stacked attacking squad at Goodison Park.
In other Everton news, a reliable journalist has reported that the Toffees are set to sign this highly rated enforcer.
We’ve launched a << BREAKING NEWS FEED>> exclusively for your club. ‘Like Us’ on Facebook by clicking here if you want 24/7 updates on all Everton breaking news.