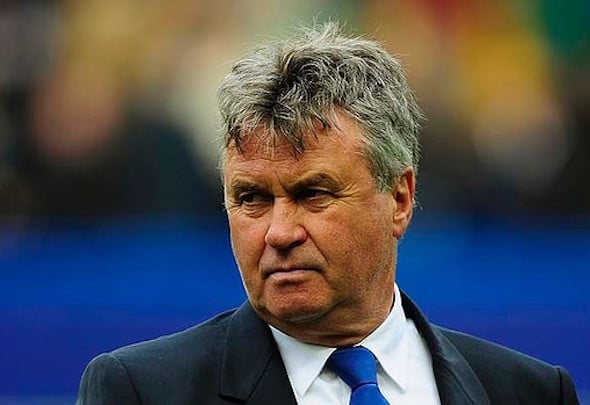 By Editor Wayne Veysey
Guus Hiddink will be named Chelsea manager until the end of the season, Football Insider sources understand.
The Dutchman, 69, will take over from Jose Mourinho at Stamford Bridge in his second spell as caretaker manager of the club.
A Chelsea source has told Football Insider that Hiddink has been given the job on a temporary basis by owner Roman Abramovich after Mourinho was told at 2pm on Thursday that he had been sacked.
Hiddink will meet the Chelsea players on Friday morning and take training at the club’s Cobham headquarters ahead of Saturday’s game against Sunderland at Stamford Bridge.
The Dutchman will take over with Chelsea marooned in 16th place just a point above the relegation zone and 20 points behind Premier League leaders Leicester.
Since the defeat to Leicester on Monday, Chelsea have been exploring possibilities to replace Mourinho.
Hiddink won an FA Cup with Chelsea in 2009 when he combined the role with the Russia manager’s job following the dismissal of Luiz Felipe Scolari in the February of that year.
The Dutchman proved popular among the players and was considered for the post permanently but his position with Russia made that impossible.
Hiddink returns to Chelsea after he was sacked from his last job as Holland manager in June 2015.