Keith Hackett has claimed Jack Grealish is guilty of going to ground too easily at Aston Villa.

Speaking exclusively to Football Insider, the ex-Premier League and FIFA referee suggested the England international is constantly frustrated by the attention he receives from the opposition.

Grealish has been fouled a whopping 98 times in the Premier League this season – over 35 more times than any other player [Wyscout]. 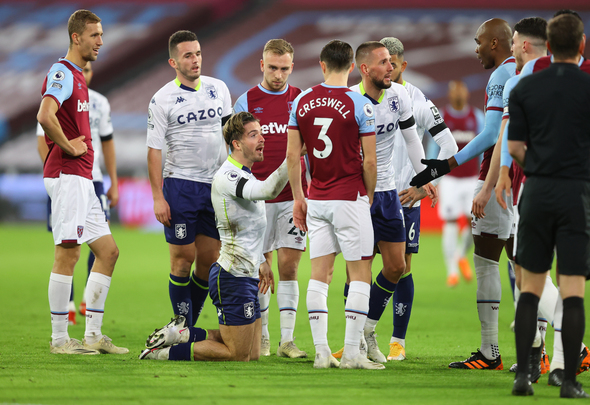 Last season, the 25-year-old also suffered the most fouls in the division (165), 46 more than Wilfried Zaha.

“The thing is, he’s the playmaker and he’s the guy who receives the ball a lot,” Hackett told Football Insider correspondent Connor Whitley.

“Grealish, the playmaker, and the [opposition] coach is going to say ‘If I can stop him it will have an effect on the whole of Aston Villa.’ So we have to recognise that.

“There’s no doubt he invites players to come onto him. He stands with the ball, with his back to the opponent and the opponent follows through. To some degree, some of that is frustration.

“It’s important for referees to understand to keep an eye on Grealish in the game because every player has a threshold of what goes past being part of the game and then annoyance kicks in because he feels he’s not getting protected and that can escalate into mass confrontation and retaliation.

“Referees have got to have one eye and say ‘Right, ok, that’s a foul, I’m going to blow.’

“He’s like Mohamed Salah and Harry Kane. If he’s losing possession of the ball, and there are no options available he’ll look to go down.

“He falls backwards. Often it’s not like a dive it’s actually just falling backwards onto his opponent. He’s clever with it.”

In other news, Aston Villa’s big-money summer transfer plans to keep Grealish have been revealed.