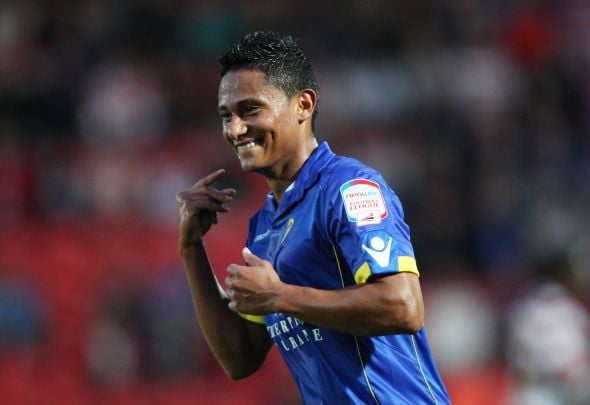 Flair, skill, tenacity and an eye for goal; Ramon Nunez showed so much promise for Leeds during his three-year stay, but where is he now?

The 45-time Honduras international was an unknown when he signed for the Yorkshire giants back in 2010 from his home country’s most successful ever side, Olimpia.

Making 25 appearances during his time in Yorkshire, Nunez developed an exciting and explosive reputation through the kind of skill and creativity that is rarely seen on a cold December night at Elland Road.

But an anterior cruciate ligament injury in his final year at Leeds cut short his stay, as he returned to his first club FC Dallas.

The 30-year-old began his career with Major League Soccer outfit FC Dallas, and the attacking midfielder hit the ground running despite being only 18.

In just 70 league and cup appearances, a teenage Nunez had struck 14 times and provided a further six goals in assists from midfield.

He interested a whole host of clubs throughout the Americas, but opted to move to MLS rivals Chivas USA. Spells followed with the likes of Olimpia, Puebla and Cruz Azul, before a move to Leeds finally came about.

Nunez dazzled the Leeds faithful, albeit largely from the substitutes bench, with the type of skill that has only been matched in recent years by the likes of Adryan, Pablo Hernandez and Hadi Sacko.

Despite a resurgence in the Leeds side after a successful loan spell with Scunthorpe, Nunez grew tired and returned to where it all started at FC Dallas.

Now, the 5ft 6in attacker has moved to Fort Lauderdale Strikers in the second tier of the American soccer pyramid, following a prolific spell back in his home country with Real Espana.

In other Leeds news, Eunan O’Kane has revealed there is no limit on these two Leeds stars.