Frank McAvennie claimed Arthur Masuaku made a “big difference” at the weekend but admitted he has “mixed feelings” about the West Ham defender.

The former Irons and Celtic striker, speaking exclusively to Football Insider correspondent Dylan Childs, insisted that he has “not seen enough” from the 26-year-old since he moved to the London Stadium.

Masuaku was handed a rare start in the 2-1 loss to Arsenal on Saturday as David Moyes switched to a back five following the shock 2-0 home defeat to Newcastle United on the opening day of the season. 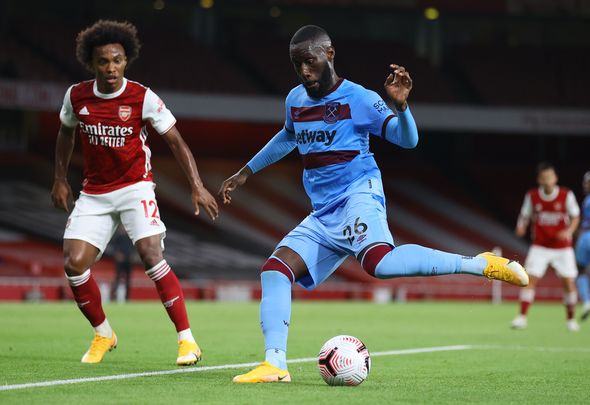 It was his first Premier League start since February having struggled with a series of niggling injuries over the past 12 months.

The left-back, who can also play in a more advance left-midfield position, penned a contract extension in July 2019 that ties him down to the club until the summer of 2024.

When asked by Football Insider if he wanted the former Olympiacos defender to be a regular feature for the Hammers going forward, McAvennie said:

“I have mixed feelings about the boy. I have not seen enough from him in a West Ham shirt.

“But when Pablo Fornals plays in front of Cresswell he ends up coming back too much and he is not a defender. At least when Masuaku drops back he knows what he is doing in there because he is a left-back. It is a big difference.

“In that regard, Moyes got the tactics right at the weekend.”

In total, Masuaku has made 95 appearances for the Irons, scoring one and assisting seven goals in that time.

David Moyes’s side face Hull City tonight in the fourth road of the EFL Cup before welcoming Wolves to the London Stadium on Sunday in the Premier League.

In other West Ham news, Noel Whelan claims David Moyes will be “kicking himself” after Celtic transfer decision.