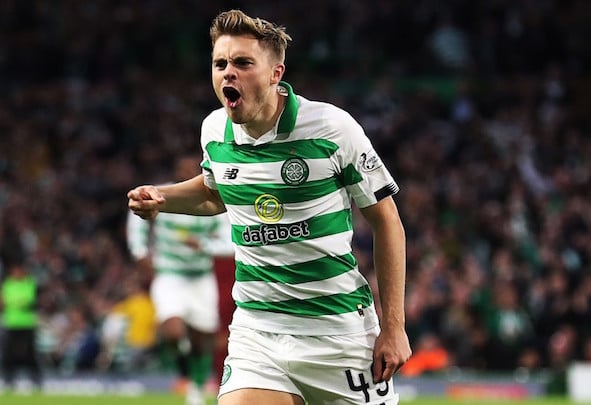 Jackie McNamara has been left raving over the recent form of Celtic winger James Forrest after an important week for the Hoops.

Speaking exclusively to Football Insider assistant editor Russell Edge, the former Bhoys and Scotland defender says that the 28-year-old attacker has been brilliant in the club’s recent fixtures, having seen the Glasgow giants reach the Scottish League Cup final as well as qualifying for the Europa League knock out stages.

Forrest, who started Sunday’s 2-0 Premiership win over Motherwell to keep Celtic top of the league, scored in the 2-1 win over Lazio in Rome, having chipped in with an assist in the League Cup semi-final versus Hibernian.

McNamara says that Forrest is a man who always steps up to the plate when he is most needed by the Hoops and says it was great news to see him sign a new contract at Parkhead.

“It was a fantastic finish across the net (v Lazio). He always delivers in big games, away from home. It was a massive game and to qualify with two games left to spare is a fantastic achievement.

“He’s just signed a new deal there. Celtic’s a great fit for him in his career, he’s happy there. He’s extended that and I think he’s said he’d like to finish his career there.

Forrest has already played 25 times across all competitions for Celtic this season, netting 11 goals and contributing a further 12 assists.

He featured for 67 minutes in Sunday’s victory over Motherwell, Odsonne Edouard and an own goal from Richard Tait keeping the Bhoys at the top of the table heading into the international break.

In other Celtic news, a Football Insider pundit claims that the Hoops have been handed a significant advantage over Rangers in the hunt for the Premiership title.