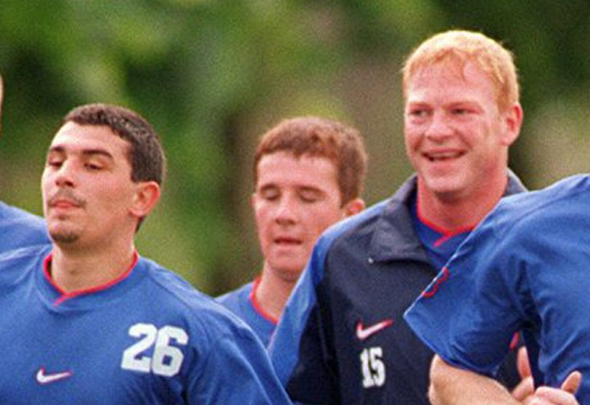 Former Rangers midfielder Charlie Miller has raved about Graeme Murty for “bringing the identity back” to the club after Pedro Caixinha’s failed summer rebuild saw the Portuguese sacked in October.

Caixinha brought in a host of foreign players over the summer as he tried to build a squad capable of challenging Celtic for the Scottish Premiership title but found his side lagging fourth in the table before Halloween.

After having control during the January transfer window, Murty added five British players to his squad as the Light Blues looked to get their season back on track and saw an upturn in results following the winter break.

Now, Miller has slammed Caixinha for his transfer decisions at Ibrox which mainly saw overseas players arrive with little clue about Scottish football.

“Graeme Murty is definitely bringing the identity back,” Miller said, as quoted by The Herald.

“Pedro Caixinha brought in a lot of foreigners who probably didn’t know too much about the game here, and unfortunately, they struggled. We all wanted them to do well, but unfortunately that wasn’t the case.

“Murty has brought in a few British players who know what it’s all about, but it’s no good just signing them because they are from Britain, he has to bring in players who can win against Celtic, not just get close to them.

“So, although it was better against Celtic, we need to win. We want quality players know what Rangers Football Club is all about, and they know they have to win games.”

The Gers are currently ten points behind their bitter rivals in the Scottish Premiership table and face a Scottish Cup semi-final against Brendan Rodgers’ side next month at Hampden.

The Ibrox side have only picked up one win against Celtic since their financial meltdown in 2012 saw them thrown out of the Scottish Premiership and have to climb back up the leagues.

It’s clear that the players Murty and director of football Mark Allen recruited in January have much more of an idea of what is expected at the Light Blues. While the Gers still aren’t where they need to be, they are getting closer to Celtic and it isn’t a coincidence there is a core of players at Ibrox now who grew up as fans of the Glasgow giants. A win over Celtic in the upcoming Scottish Cup clash would go some way to helping the Gers get a little closer again and put some pressure on their bitter rivals.