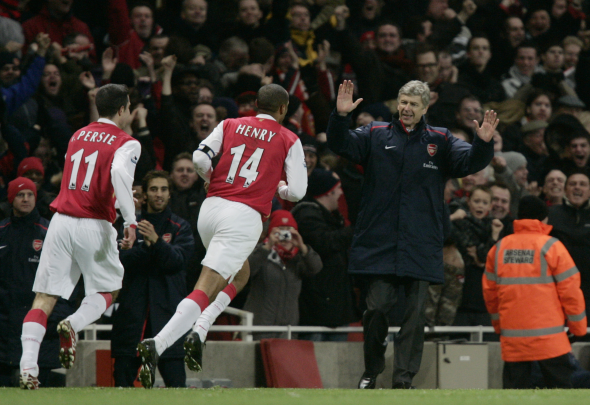 Thierry Henry has insisted he still dreams of managing Arsenal, despite being axed from the club following an ultimatum from Arsene Wenger.

The former France international worked alongside the Gunners youngsters last season while earning his coaching badges and Wenger offered him a role with the club’s Under-18s this term.

However, Henry’s former boss insisted that the Arsenal legend quit his job as a pundit with Sky Sports to take up the position at the Emirates.

Henry was not willing to do so, but he still insists that he would still like to take charge of his former club in the future.

“I’d be lying if I told you being manager wasn’t a wish that I have because I love Arsenal,” Henry told The Sun.

“The game is my passion and always will be. I would like to manage – but I am far from it.

“Although I am able to manage any team now, I would like to pass my UEFA Pro Licence, which I’m working on to give me a better all round knowledge.”

The poster-boy of the 2004 Invincibles side has worked with Arsenal’s youth sides at all ages as part of his UEFA A licence qualifications.

However, Wenger’s opinion of Henry working with Sky has soured after the 1998 World Cup winner stated on Sky that he believes The Gunners won’t win the Premier League with Olivier Giroud as their talisman.

Arguably the Gunners’ greatest player of all-time, Henry found the back of the net 228 times in 376 games in all competitions.

Henry also played for Juventus and New York Red Bulls, before returning to Arsenal in a short loan spell in 2012 before he hung up his boots in 2014.

In other Arsenal news, Roma have slapped a £37 million price tag on defender Kostas Manolas amid interest from the Gunners.