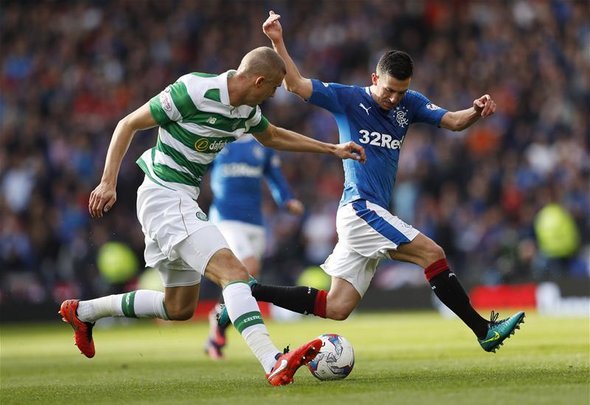 Rangers manager Mark Warburton should switch to a 4-4-2 formation against Aberdeen, with midfielder Jason Holt missing out as a result.

Barrie McKay should come into the side and replace Holt in the only change to the starting line up.

Warburton has preferred a 4-3-3 set-up for the majority of this season and it has been exposed in recent matches.

The Gers slipped to a 2-0 defeat against Hearts on Wednesday night and have slipped down to third in the table, with four-placed Aberdeen set to be another difficult game.

Andy Halliday and the defensively-minded Matt Crooks should form the midfield pair, with McKay and Harry Forrester providing width.

Rangers should play with two strikers and allow Kenny Miller to have a central role alongside Joe Dodoo.

Rangers should stick with the same defensive options and goalkeeper Wes Foderingham have proved in recent games that he deserves the number one spot ahead of Matt Gilks.

James Tavernier and Lee Wallace both need to play with attacking intent in the full-back positions and utilise their strengths, while Rob Kiernan and Danny Wilson remain the best options at centre-back.

Crooks would provide the right balance to the side as the holding midfielder and team-mate Halliday deserves a starting spot ahead of Holt.

Holt, 23, has looked like a passenger in recent games and has been unable to stamp his authority unlike Halliday.

Winger McKay should be handed the opportunity to start after being used as a substitute in the last four league games.

The 21-year-old has looked lively as an impact and would provide the extra energy and skill that Rangers need in attack.

Dodoo and Miller would offer the perfect blend of youth and experience, with Joe Garner an option to use as a substitute.

Miller has been used as a left winger for much of this season by Warburton and he has been unable to show his goalscoring ability, while Dodoo should retain his place after two positive performances for the Gers.

In other Rangers team news, Warburton has hit back at a Sky pundit over his comments.