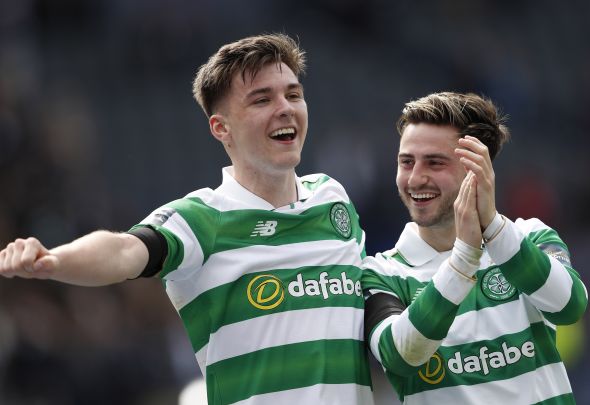 Kieran Tierney has revealed that he wants to stay with Celtic despite plenty of reported interest from England’s biggest sides.

The Mirror claims Manchester United, Manchester City, Chelsea and Arsenal are all interested in the 19-year-old left-back, with £10million said to be enough to prise him from Parkhead.

However, Tierney will have delighted Celtic fans by stating that he wants to remain with Celtic after a sublime season on the left side of defence under Brendan Rodgers.

Asked if he saw himself staying at Celtic on the Hoops’ official Twitter account, he delivered a short to-the-point message  “I do. This is a great place to be and I’m really enjoying it.”

💬 KT when asked if he saw himself staying at #CelticFC next season: "I do. This is a great place to be and I'm really enjoying it."

This season, Tierney has been in great form for Rodgers’ side during his 38 league and cup encounters, providing a huge 12 assists from defence as well as scoring two goals.

He has proven to be a huge influence despite his tender age, becoming integral in Celtic’s Scottish League Cup and Scottish Premiership triumphs.

Now, Tierney will be hoping to play a part in Celtic’s remaining three fixtures, which sees them travel to Firhill Stadium on Thursday, before facing Hearts on Sunday in the last league game.

Celtic then go up against Aberdeen on May 27 in the Scottish Cup final, as they look to complete a marvellous treble in Rodgers’ first season.

In other Celtic transfer news, fans will also be delighted to hear Scott Brown’s latest comments.