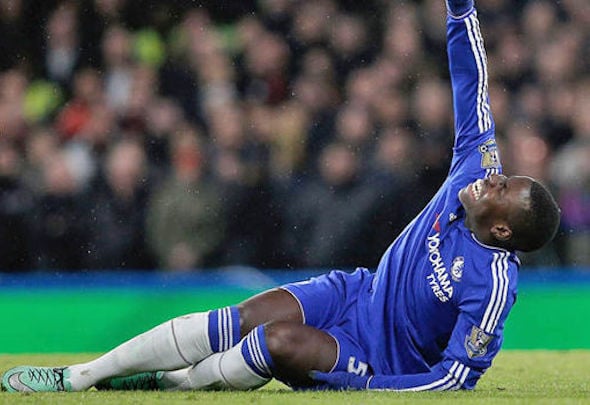 Kurt Zouma is facing up to a year on the sidelines with the knee injury he suffered against Manchester United on Sunday.

Zouma took to social media site Twitter on Monday evening to reveal that scans had revealed he had torn his anterior cruciate ligament.

The Frenchman will undergo surgery within the next 48 hours and then faces a lengthy spell recovering before he can play again.

Chelsea claimed in a statement that Zouma will be sidelined for “approximately six months”, although that could be an optimistic timeframe.

In the worst-case scenario, the defender will be out for the rest of 2016 with an injury that requires extensive rest before a long period of rehabilitation begins.

It is same injury suffered by Theo Walcott in January 2014 and which kept the England international out for nearly a full year.

Scan today has shown I injured my ACL. I will have surgery this week & will come back stronger. Thank you everyone for all the messages ????

He screamed in pain every few seconds before undergoing several minutes of treatment on the pitch.

Zouma was then stretchered off to be replaced by Gary Cahill, who had once again been left on the bench in favour of his younger team-mate.