Recent Celtic recruit Jonjoe Kenny has taken a “step down” in moving to the Scottish Premiership, says Alan Hutton.

The former Rangers star spoke exclusively with Football Insider after the 23-year-old right-back made his second start since joining on loan from Everton in the 2-1 win over Motherwell on Saturday.

Kenny signed as a replacement for the Bayer Leverkusen-bound Jeremie Frimpong, who left Parkhead in an £11.5million deal on 27 January. 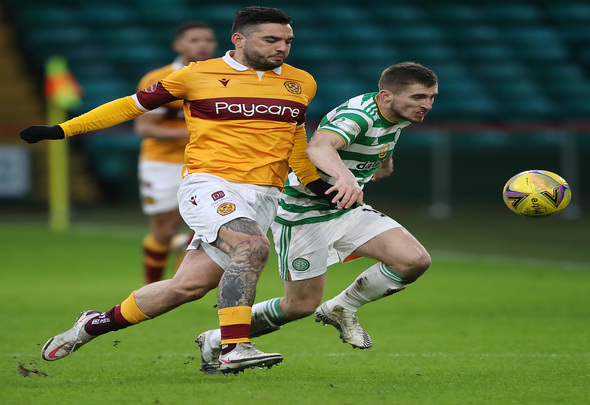 Celtic then finalised a six-month loan move for promising full-back Kenny on deadline day and the former England Under-21 has impressed Hoops fans in the two games since.

But Kenny has been a regular at times for Everton and impressed while on loan last season at Schalke in Germany.

Hutton thinks he has taken a “step down” with his Glasgow move.

Asked if the Scottish Premiership was a good enough level for Kenny to prove himself for a future at Everton, Hutton told Football Insider assistant editor Russell Edge:

“I mean, obviously no disrespect to the Scottish league but it’s not the German league.

“We’re talking about the high-end in Europe so you’d say it was a step down. It probably came late on, he maybe didn’t have too many offers and he’s decided: ‘Look I need to play.’

“Seamus Coleman is not going to be there forever so there is a route into the team but he has to play football, I’ve been in this situation myself, you can’t just sit there for another four or five months and do nothing.

“I do think there’s a good opportunity for him, he’ll play week in, week out and it’s just about keeping his standards high. He’s obviously got high standards — he’s played in the Prem, he’s played in Germany.

“It’s about keeping that quality up there and if he does that then that will shine through. He definitely is a good player.”

The Liverpool-born defender has also spent time on loan with Wigan Athletic and Oxford United as well as making 48 senior Everton appearnances.

In other news, a former Celtic star has said Olivier Ntcham is a case of wasted potential at Parkhead.