Aberdeen winger Ryan Hedges should not have been sent off for his challenge on Rangers striker Alfredo Morelos, according to Frank McAvennie.

Speaking exclusively to Football Insider, the former Celtic and St Mirren forward said that he feels sorry for Dons boss Derek McInnes after a key decision went against his side.

Morelos bagged a brace at Pittodrie as the Light Blues put further distance between themselves and Celtic with a 2-1 win on Sunday.

They have now won their last 1⃣5⃣ league games, while scoring 42 goals and conceding 4. #UEL pic.twitter.com/qUB2YreNC0

However, the scoreline could have been much different had Aberdeen not been reduced to 10 men shortly before the half hour mark.

McInnes bemoaned the “harsh” decision after the final whistle but accepted that it was “the right decision based on the laws”.

When asked by Football Insider for his assessment of the decisive incident, McAvennie said: “I feel sorry for Derek McInnes.

“It was definitely a penalty at the weekend but it was never a sending off.

“I do not get it. I saw it and I was thinking, ‘What?’ It was an accident. I cannot understand it. No qualms about the penalty but the sending off was very harsh.

“Morelos stepped up on Sunday and did what he does best. He is an exceptional player and I have always said that but it is his temperament that is the problem.

“It looks like he is going to win something this year though.”

Speaking after the loss, McInnes told Sky Sports: “It seems a really unfair outcome but John Beaton explained it to me at half-time. 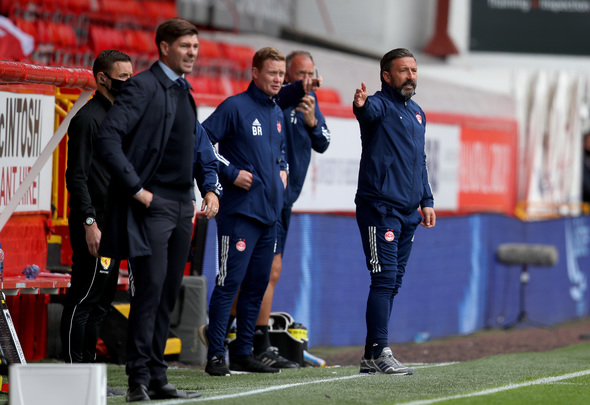 “He said ‘I’ve nowhere to go with this. I know it was accidental but because it wasn’t a genuine attempt it has to be a red card.’

“Once he explained it you have to say it was the right decision based on the laws.”

In other news, Kevin Phillips is excited by a ‘Huge’ update on Rangers pursuit of a defensive signing.