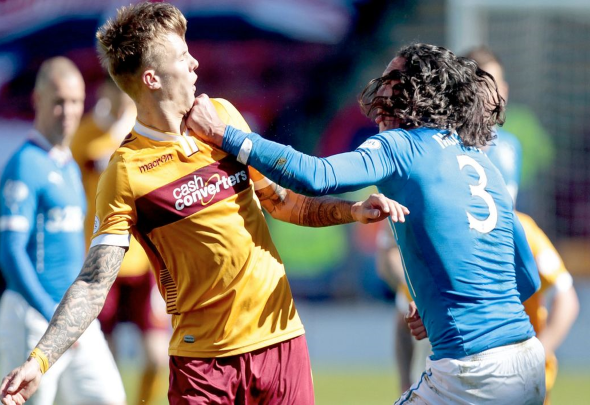 Former Rangers defender Bilel Mohsni has revealed he hasn’t spoken with anyone at Ibrox after leaving the Gers in shame following his bust-up with Motherwell’s Lee Erwin.

Mohsni got into a fight with the Motherwell striker at the end of the Scottish Premiership playoff between the sides in 2015 and had his contract ripped up by the Gers in the immediate aftermath.

The Tunisian was hammered with a massive ban by the Scottish FA but revealed he has wanted to return to Ibrox but has been worried about the reaction so hasn’t made contact with them.

“I haven’t spoken to anyone at Rangers since the day it happened,” Mohsni said, as quoted by the Scottish Sun.

“I didn’t know what the reaction would be like, so I never got in touch.

“I have always wanted to come over and watch games there because the club was good for me and they helped me a lot.

“It was when I was with Rangers that I first got into my national team, so it was a great moment for me when I was there.”

The defender returned to Scottish football last week when he signed a short-term deal with Championship side Dundee United and could finally head back to Ibrox to watch his former side.

Mohsni left Scotland immediately after his fight with Erwin and hadn’t set foot back in the country before returning to hold talks with Dundee United.

It iss not surprising the defender hasn’t been in touch with anyone at Ibrox after his conduct against Motherwell – or his vanishing act in the immediate aftermath. The Tunisian was always a moment away from making a catastrophic error on the pitch and many were glad to see the back of him – even before his fight – and will be hoping he hasn’t changed not that he’s signed for Dundee United. It’ll be interesting to see if the defender does indeed return to Ibrox now he is back in Scotland or if he keeps his distance. Of course, he could always just buy a ticket like everyone else.