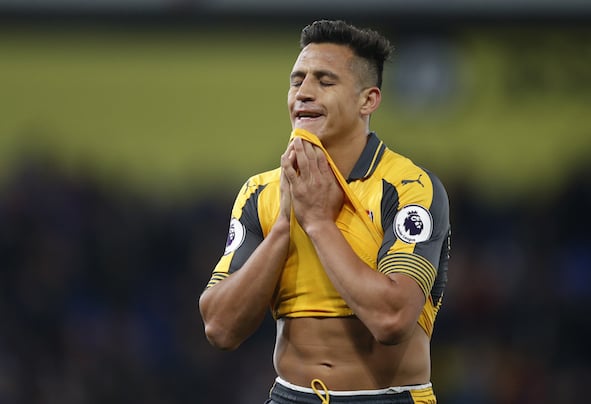 Former Everton star Phil Neville has claimed he would not touch Arsenal forward Alexis Sanchez “with a barge pole” following his antics in recent weeks.

Sanchez was one of the Gunners’ star men on Sunday as they beat Man United 2-0 at the Emirates.

Despite not getting on the score sheet the Chilean was at the centre of everything good for Arsene Wenger’s side.

It was Granit Xhaka and Danny Welbeck who got the goals to sink United and close Arsenal’s gap on them to just two points.

However, despite the 28-year-old’s return to form, Neville still claimed he would not sign him after his “sulking” in recent weeks.

Speaking on Match of the Day 2 (Sunday 10.30pm), Neville said: “If I saw Sanchez for the past month, the sulky, the moody one – I wouldn’t touch him with a barge pole.”

The former Man United star did speak positively about the Chilean as well however: “He played at a different intensity to everyone else on the pitch. He just has that ability to open up a defence from that central position.”

This comes after Sanchez, who has only one year left on his deal, has admitted that no progress has been made in his contract talks.

Sanchez has been a key man at the Emirates since his arrival from Barcelona in 2014 and has played 139 times for the club in all competitions.

The 108-time Chile international has been in fine form this season despite his contract issues, scoring 24 goals and supplying 18 assists in his 46 league and cup games.

In other Arsenal news, this BBC pundit heaped praise on this Arsenal duo.