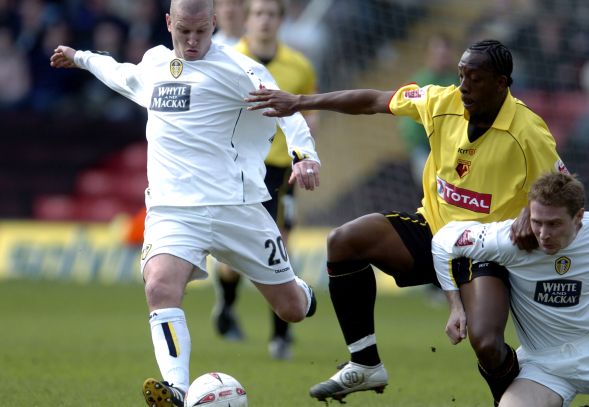 Ex-midfielder Seth Johnson insists his move to Leeds from Derby  in 2001 was never about the money.

Johnson was reported to have been earning near £5,000-per-week at Derby, but managed to secure a stunning pay rise to £37,000-a-week.

The contract negotiations with Peter Risdale, who was chairman of Leeds at the time, have triggered great debate over the years, but Johnson reveals he was never ‘motivated by money’.

However, regardless of Johnson’s contract ‘myth’ – a term notoriously used to describe the contract saga – the former English midfielder endured a torrid spell at Elland Road, earning his place in history as one of the club’s many failed transfers.

A series of severe injury problems had restricted him to just 59 appearances in four years with Leeds, before he eventually quit the club to return to Derby in 2005.

Speaking to Planet Football, he said: “I was desperate to go to Leeds and play well. They were flying high at the time, and I was starting to get a decent reputation for myself, but I kept breaking down with different injuries.

“I’d never really been injured before then, but I think I had seven or eight operations within four years. It was just a nightmare, I could never get a run of games going. When I was fit I enjoyed being there.

“It wasn’t motivated by money for me. Derby decided to sell me because they wanted the money. When they talk about negotiations for the contract, I wasn’t even there. The contract had nothing to do with me.”

It had been agreed between the two clubs when he moved to Elland Road that Leeds were to pay Derby £250,000 for every 15 appearances, up to a maximum of £1.25million.

However, when Johnson returned from an 11-month lay-off in April 2004, Leeds had made the decision to exile him from the first team, in order to avoid paying any further bonuses to Derby.

It was later decided that the Yorkshire-based club would cancel his contract at the end of the season, paving the way for him to return to Derby and end his Leeds nightmare.

Johnson, who earned one senior international cap for England, was forced into an early retirement at the age of 28, due to his ongoing fitness concerns.

In other Leeds transfer news, a reliable journalist has delivered an update on the club triggering a buyout clause for this Premier League ace.