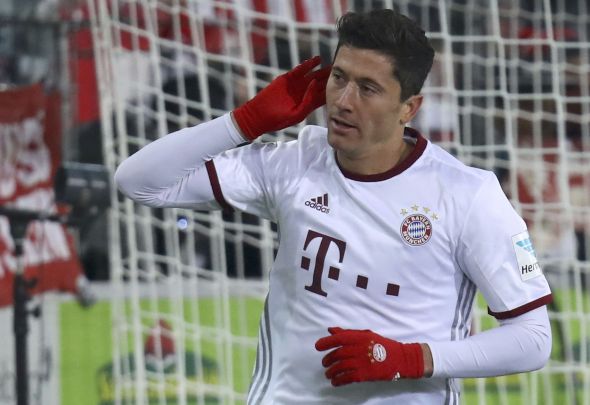 Ian Wright has insisted that Arsenal must sign Bayern Munich striker Robert Lewandowski if they sell Alexis Sanchez this summer.

The Daily Mail has reported that Bayern are “leading the chase” for the Chilean international, who is seeking a new deal at the Emirates.

It is understood that the Bundesliga champions will offer him a stunning £350,000-a-week deal to lure him towards the Allianz Arena, but Wright is adamant that he wants Lewandowski in return.

The 28-year-old scored a stunning 43 goals across all competitions for Bayern this term and has scored more braces than single goals in the Bundesliga.

Wright, 53, knows a thing or two about being a successful striker with the Gunners and took to his personal Twitter account on Saturday to recommend who Arsene Wenger should sign next.

“If Sanchez wants to go to Bayern fine, as long as we get Lewandowski,” said Wright.

Lewandowski is highly regarded as one of the best out-and-out strikers currently playing in world football.

The 86-times Poland international moved to Bayern in 2014 from Bundesliga rivals Borussia Dortmund after his contract at Signal Iduna Park expired.

He has since scored 110 goals in 147 appearances across all competitions for Bayern in the last three years, winning a hat-trick of German league titles.

Arsenal will not be in the Champions League next season for the first time under to charge of Wenger.

They were knocked out of this year’s competition at the hands of Bayern, who proved 10-2 aggregate victors over two legs.

In other Arsenal news, the Gunners are plotting a £10million move for this forward.