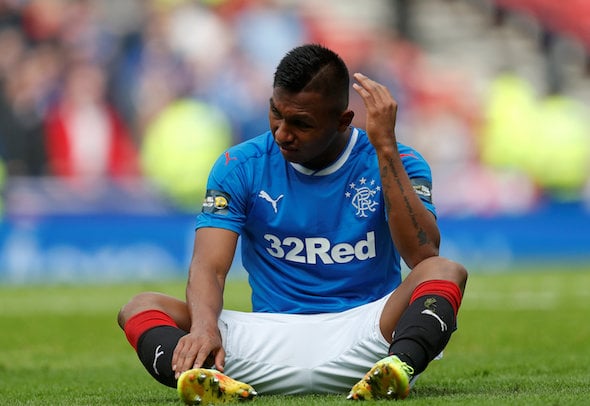 Speaking exclusively to Football Insider, the Celtic and Scotland legend insisted that the Colombian hothead is unsuited to the Ibrox spotlight and his lamentable disciplinary record makes him a “liability”.

McNamara highlighted Morelos’ wretched record in clashes between the two Glasgow giants as proof of how he is not the spearhead Rangers need.

Morelos is available for selection in today’s 12pm kick-off at Ibrox after missing four matches for the red card he received in the 2-1 defeat to Celtic last month at Parkhead.

“Certain players, like Morelos, haven’t scored against Celtic despite all the attention, how good he’s been, which for me he hasn’t. He’s been more a liability for them,” McNamara told Football Insider.

“It’s alright scoring goals against certain teams but you’re judged on big games and he hasn’t performed. He’s been sent off five times in one season which most strikers wouldn’t have that in their whole career. “I think Gerard’s protected him pretty well in the media but at the end of the day he’s become a bit of a liability for them.”

“Is he going to change? I don’t think he can. Because there’s such a spotlight on Rangers it maybe doesn’t suit his personality. He’s may be better
going to somewhere that’s not (got) the demands, or they think that everybody’s against them or (where) a draw or a loss is a nightmare.”

Morelos has scored 29 goals from 46 matches this season to top the Scottish scoring charts, including 17 from 27 SPL encounters.

But he has not netted against Celtic in the last two campaigns and could be on the bench again after Jermain Defoe was preferred to him in the starting line-up for the win over Hibernian last weekend.

In other Rangers news, it can be REVEALED that Steven Gerrard has given a defender at the club his marching orders after big development.