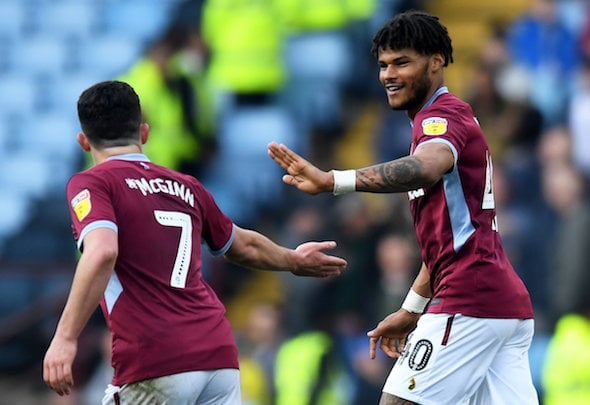 Former Leeds United star Noel Whelan says he would love to see Tyrone Mings at Elland Road after the defender impressed on the way to promotion with Aston Villa.

The Bournemouth loanee played a crucial role in bolstering the Villans’ defence as they made their way to play-off glory and Whelan, speaking exclusively to Football Insider, was left blown away over how the powerhouse transformed the fortunes of Dean Smith’s side following his arrival.

The 26-year-old centre back played 18 times in the second tier, scoring twice, and Whelan heralded the impact he made in Villa’s rise up the ranks and into a play-off final, beating Derby County to secure a return to the top flight.

“Tyrone Mings has been at a Premier League club for a while now and just not really given the opportunity,” Whelan told Football Insider in an exclusive interview.

“We saw last season, playing for Aston Villa, what a difference he made. He was that missing piece as far as I’m concerned – they were scoring goals but leaking too many. Since he came in there was a different attitude and a different steeliness about that Aston Villa back four.

“He’s a leader, he’s dangerous in attacking situations, very aggressive in defence – I’d love to have him at Leeds United.”

Mings has just 17 games under his belt in the Premier League during his time with parent side Bournemouth, injuries, such as a torn knee ligament, curtailing his playing time on the south coast.

The majority of his first team experience has come in the Championship with Ipswich Town, having played 63 times for the Tractor Boys before moving to the Cherries.

In other Leeds United news, it can be REVEALED that the Whites are set to ship off a giant to an English club this summer.