Noel Whelan has revealed he is “not surprised” at reports that Qatar are keen to take over Leeds United.

Speaking exclusively to Football Insider, the ex-Leeds striker hailed the Yorkshire giants as a “huge club” and a “very saleable” one despite them preparing for a 16th consecutive season out of the Premier League.

Whelan delivered his verdict after reports surfaced last weekend that Qatar is in talks to buy a stake in Leeds in a deal that would allow the gas-rich state to enter English football for the first time.

It has subsequently been denied by the club in briefings to the media, but Whelan is convinced that things could be happening behind the scenes.

“I would have thought there is some truth to it,” he told Football Insider. “Qatar don’t own a club in England and Leeds is a very saleable club. It’s a lot stronger and healthier than for some time, with the ground bought back by Andrea Radrizzani when he took over. “It’s a huge club with great history and the fanbase is amazing. I’m not surprised they’re interested, especially if they want a big English club. It’s a lot cheaper than buying Liverpool or Manchester United.

“As a club, Leeds need some help from somewhere. Mr Radrizzani has spoken about the running costs being high, and the fans want to see investment in the team.”

Radrizzani took full control of United in May 2017 when he completed his buy-out of ex-owner Massimo Cellino,

He subsequently sold 25 per cent of Leeds’ shares to the investment arm of the San Francisco 49ers, but retains operational control of the club.

‘One of the best the PL has ever seen’ – Exclusive: Phillips tips one man to stop Villa rot 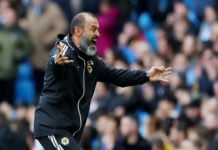