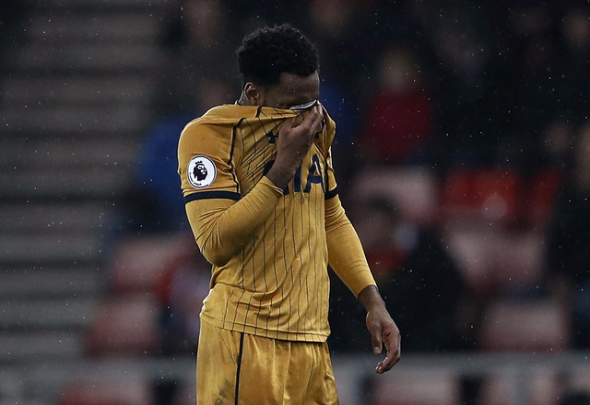 Danny Rose has been omitted from the Tottenham 2018 calendar because there are no images of him in the clubs new Nike kit, according to a club source.

The Sun quote an insider as claiming that Rose’s knee injury is the real reason for his absence from the official merchandise amid suspicion that he has been left out because his days at White Hart Lane are numbered.

The Lilywhite Rose Twitter account posted images of the official 2018 calendar and England international Rose was a notable omission from both the front cover and the individual month pages.

No Danny Rose on the official club calendar. pic.twitter.com/t53WBpOi1y

But the most notable omission is left-back Rose, who upset the Spurs hierarchy when he criticised the club in a summer interview and insisted he would be open to offers from other teams because he wants bigger wages.

Tottenham have not commented officially on why the 27-year-old has been left out of the calendar but the Sun quote a source who says it is related to the injury that has sidelined him for nine months.

A club insider said: “Danny is not the only player who doesn’t appear in the calendar – Ben Davies, Erik Lamela and Moussa Sissoko are not in it either, along with our summer signings.

“People will say it doesn’t look good for Danny but the fact he has not played this season means there are no images of him in our new Nike kit that could be used in the calendar.

“I am sure, that after he returns to action, he will be in the 2019 calendar – assuming he is still with us, obviously.”

Rose has not played for Spurs since breaking down with a knee injury in January that required surgery at the end of last season.

But he has returned to first-team training this week and was pictured on Wednesday being put through his paces at the club’s training headquarters.

Nevertheless, the Sun report that Rose is not yet available to be in contention for Saturday’s Premier League home clash against Bournemouth at Wembley.

In other Tottenham news, a prolific striker has revealed how he was left “broken” by the demands of Pochettino.