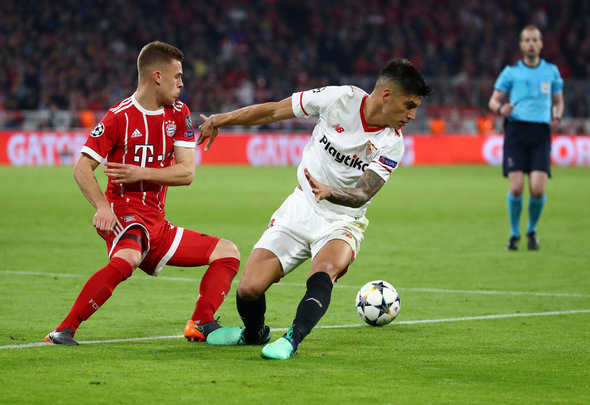 West Ham are targeting a loan move for Sevilla midfielder Joaquin Correa, according to a club Insider.

ExWHUEmployee, a man in the know on the comings and goings of transfer activity surrounding the London Stadium, regularly breaking accurate information, stated on his blog that there was potential for a temporary transfer of the Argentinian winger, who is a friend of Manuel Lanzini and admired by the new director of football, Mario Husillos.

The Hammers have been busy in the transfer market so far this summer, having already signed Ryan Frederick’s, Lucasz Fabianski as well as Issa Diop and are closing in on a deal for Felipe Anderson from Lazio, according to a Sky Sports journalist.

The 23-year-old had a tricky season last term with Sevilla where he found himself in and out of the starting XI in the league where statistically speaking, he did not exactly pull up any trees. However, a starring role in the Champions League where he provided an assist as the Spanish side knocked Manchester United out of the competition will give the Hammers an idea of what the Argentinian attacker is capable of producing. It’s not likely that it would take him long to settle in at the London Stadium given that he already has links to Lanzini while Husillos is also said to be a fan. Correa made a total of 21 appearances in Spanish top-flight scoring once and assisting another but it was a different matter altogether in the Copa Del Rey where he played eight times and registered on five occasions. If West Ham do make another dive into the market for the winger, they will hope it is the Correa of the Spanish cup competition they are getting.

Exclusive: Newcastle staff across the board facing axe amid takeover update – pundit claim