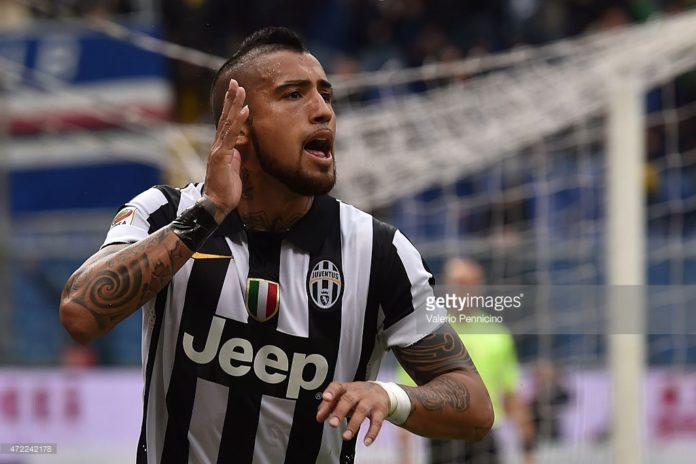 ANALYSIS By Arsenal correspondent Tony Hughes
Arsenal are keeping close tabs on Arturo Vidal but they are not currently working on a deal to sign the midfield star, Football Insider sources understand.

Reports have claimed that the Gunners have agreed a deal with the highly-rated Chile international.
Football Insider understands that is not the case, although Arsenal are ready to join the elite European clubs who will do battle for the services of Vidal if they are given encouragement he could be available.
Juventus’ stance is that they are not prepared to listen to offers for their midfield kingpin this summer although they are aware of the interest in the £35million-rated Chilean.
Football Insider understands that Arsenal manager Arsene Wenger is a big admirer of Vidal and would be interested in making a bid if he learned that there would be a possibility of signing him. For now, Wenger is prepared to play a waiting game and see if the 28-year-old box-to-box midfielder becomes available later in the transfer window.
Wenger wants to make a significant midfield signing this summer despite the emergence of Francis Coquelin in the second half of last season.
Arsenal have pulled out of the race to sign Morgan Schneiderlin after being put off by his £25m price tag to leave the coast clear for Manchester United to land the Southampton midfielder.
Vidal is one of three of Juve’s highly-regarded midfield quartet of last season who might not be at the club next season. Andrea Pirlo has agreed a deal to join New York City and Juve also face a fight to hang on to young midfield master Paul Pogba, who is attracting strong interest from Manchester City, Barcelona and Real Madrid.
Vidal has been at the heart of Juve’s run of four consecutive Serie A triumphs since his move from Bayer Leverkusen in 2011.

He has attracted strong interest from Premier League clubs, with Manchester United manager Louis van Gaal admitting that he has tried to sign him on countless occasions.
Wenger has been more coy on his interest in the Chilean although it is understood the Gunners would be among the clubs who could pursue him if the possibility of a deal increases.
Nevertheless, Arsenal will bide their time and wait for further encouragement before strongly pushing for one of Europe’s most highly-rated midfielders.