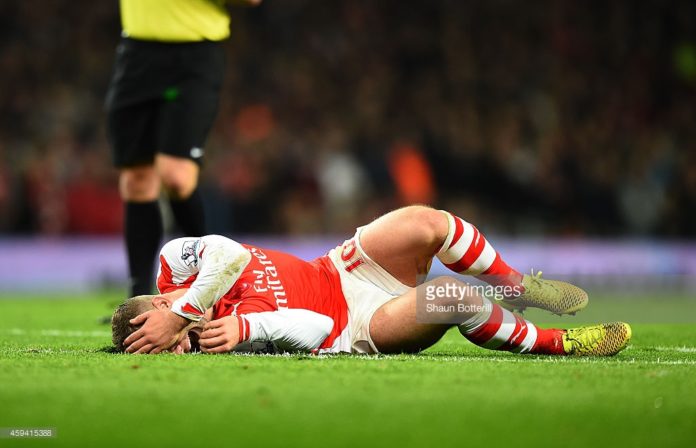 EXCLUSIVE | By Arsenal correspondent Tony Hughes
Jack Wilshere is “devastated” and “upset” after learning he will have to undergo surgery for the second consecutive season, Football Insider sources understand.

The injury-plagued midfielder will be sidelined for at least another three months, ruling him out until Christmas, after a specialist advised that he has surgery on his fractured left fibula.
A source close to the situation havs told Football Insider that the Arsenal talisman has been hit hard by the latest serious setback to his career.
“Jack is naturally devastated and upset,” the source explained. “It is another huge blow for him”.
The midfielder missed five months of last season after undergoing surgery for ankle ligament damage and will once again go under the knife to cure his fractured left fibula.
Arsenal had held back last week to see if there was any progress but the injury has not healed and surgery will take place in the next few days.
Wilshere has not played in the 2015-16 season after suffering a hairline fracture in training shortly before Arsenal’s Community Shield win over Chelsea.
The initial hope was that the latest in a series of injuries for Wilshere would not prevent him returning straight after the international break.
However, Arsene Wenger admitted at his media briefing last Thursday that his hopes of having Wilshere available to face Stoke on Saturday had subsided.