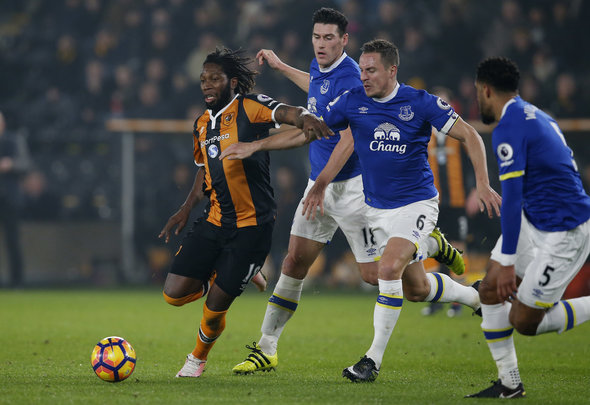 The right-back is going to be out of action for a long time after he suffered a horrific broken leg while playing in a 2018 World Cup qualifier for the Republic of Ireland against Wales.

Now Jagielka wants his side to get the better of their Merseyside rivals as a tribute to their fallen player.

After the Liverpool clash, Ronald Koeman’s side travel to Old Trafford on Tuesday night as they contest two important matches that could see the Toffees rise as high as fourth place if things go to plan.

“There are two massive games coming up and that’s one thing Seamus will want us to do, to play well and get some good results,” said Jagielka, as quoted by the Liverpool Echo.

“We’ll all be thinking about him and come Saturday and Tuesday, I’m sure he’ll have the TV on and be cheering us on.

“There’ll be no incentive needed but with the circumstances over the last few days, that might add a bit of a motivational edge on our behalf. We want to go out there and play well and it will be nice if we can all get to speak to Seamus beforehand.”

Game time has been limited for Jagielka this season and he’s only started 16 games in all competitions.

The 34-year-old has been at Goodison Park for the best part of a decade since his move from Sheffield United in 2007.

In that time, he’s made 340 appearances for the Merseyside club in all competitions and was part of the squad that reached the 2009 FA Cup final.

After starting the last two matches, Jagielka is expected to slot into Koeman’s starting line-up for the double-header against Liverpool and United as defensive options have been slimmed down with the loss of Coleman.

In other Everton news, the club are in the hunt for a La Liga centre-back who was a Barcelona taget last summer.