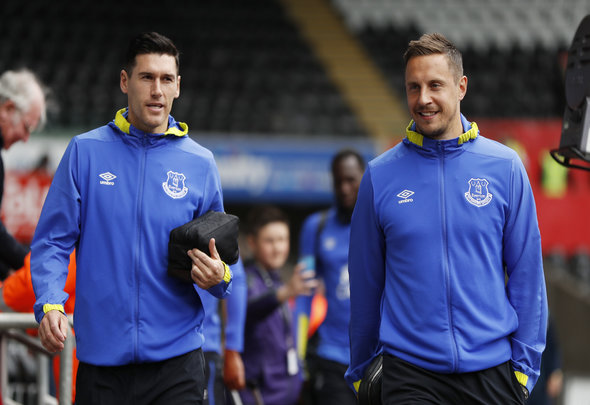 Everton captain Phil Jagielka has admitted that the squad are missing Romelu Lukaku’s goalscoring prowess this season and have had to change up their roles in order to fill the void he left.

The Toffees travel to Old Trafford on Sunday ahead of their Premier League clash against Lukaku’s new club Manchester United.

This comes after suffering a humiliating 3-0 loss against Atalanta in the Europa League on Thursday night.

After three years with the Blues the 24-year-old Belgian was named as Jose Mourinho’s new centre-forward during the summer transfer window.

Since moving to the Europa League champions the Belgian has already scored six goals in as many appearances across all competitions.

Last season, the goal-machine produced 26 goals in 39 appearances for the Toffees, and the Everton skipper has suggested that the summer deal in which Lukaku was sold to United may have been a mistake.

“At the moment, we are obviously missing his goals,” Jagielka said about Lukaku, as quoted by the Liverpool Echo.

“As soon as we knew that Rom would be on his way – and Ross (Barkley) has also not figured this season, so we have lost a few goals – we had to spread goals around the team and it’s all about everyone else now.

“It’s for the other boys now. Dominic (Calvert-Lewin) has come into the team after his great summer, Sandro has come in but not hit the ground running as far as goals go, but hopefully once we get through this tough period we will find some more fluidity further up the pitch.

“If we get two to three people nicking in with 10-12 goals this season, the loss of Rom’s goals will hopefully be dealt with.”

As Lukaku prepares to face his former team mates, Sunday’s match will also be the first time that summer recruit Wayne Rooney will play against Manchester United since moving back to his boyhood club.

Koeman’s side have had a number of difficult opponents over the past few weeks against the likes of Manchester City, Tottenham and Premier League champions Chelsea.

Mourinho’s squad remain unbeaten in the competition so far and have their sights firmly set on the top flight trophy.