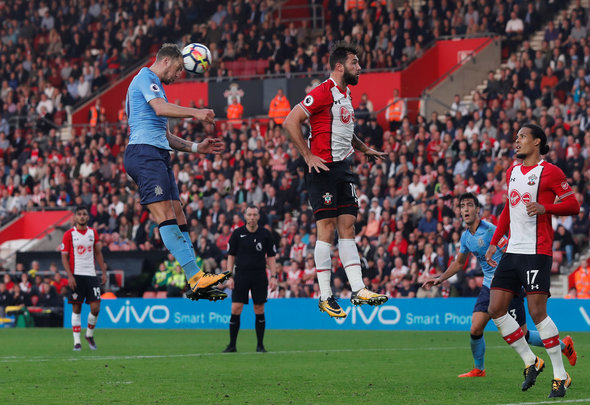 Sky Sports pundit Jamie Redknapp has said that he does not feel that Newcastle United boss Rafael Benitez’s team selection contributed to the team failing to pick up three points against Southampton.

The Magpies took the lead twice against the Saints at St Mary’s on Sunday, with Isaac Hayden and Ayoze Perez both getting off the mark this season.

However they were pegged back by a double from Manolo Gabbiadini, one from the penalty spot after Florian Lejeune’s foul on Shane Long.

Lejeune was one of two changes Benitez made to his starting XI after the club’s impressive 1-1 draw against Liverpool prior to the international break.

He and Hayden replaced Ciaran Clark and Mikel Merino, with the dropped duo both having been on international duty with the Republic of Ireland and Spain under-21s respectively.

However Redknapp says that although it was a risk leaving the duo out of the starting line up, it did not affect Newcastle too much.

“I think Rafa took a gamble leaving out Clark and Merino. Did it backfire?

“It was a clumsy challenge from Lejeune but apart from that, he looked very composed at the back.

“They’ve got some good players. Joselu up front has done a good job for them. Perez gives a good balance.”

With their one point Newcastle remain in ninth, one spot and two points above Southampton who move into tenth, while two points off of four sides, including Chelsea, Arsenal and Liverpool.

Their next match sees them welcome basement club Crystal Palace to St James’ Park, with the Eagles having scored their first goals and having picked up their first win of the season with victory over Chelsea on Saturday.

In other Newcastle United news, Football Insider has analysed three things learned about the Magpies in their draw with the Saints.