Tottenham have rejected a mind-blowing £70million bid from Chelsea for Danny Rose, according to a report.

Independent Spurs fan site Harry Hotspur has claimed that the Blues submitted the enormous offer for the left-back, 27, on Wednesday morning, just four days before the two London clubs meet in the Premier League at Wednesday.

It is said that Tottenham chairman Daniel Levy knocked back the bid from his side’s bitter London rivals with an emphatic “no dice” response.

The claims from Harry Hotspur follow a report from the Sun that Chelsea would look to make a £50million bid immediately after their Sunday clash for Rose as they look to beat the clock before the window slams shut.

However, it now looks as though the Blues are pushing forward at a quicker pace with strong links also emerging for Southampton duo Virgil van Dijk and Cedric Soares in recent days.

Rose would be a huge loss for Tottenham and to sell to a direct league rival like Chelsea would be madness for the club whatever the price. Spurs are currently facing a problem of keeping hold a number of their key players due to rivals being able to offer a lot more in wages. This is now down to the north London club to make sure they bring their wage bill up alongside others and then they will be able to move into their new stadium with a top team and the likes of Rose, Harry Kane and Dele Alli all still within the squad. 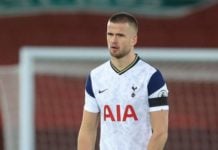