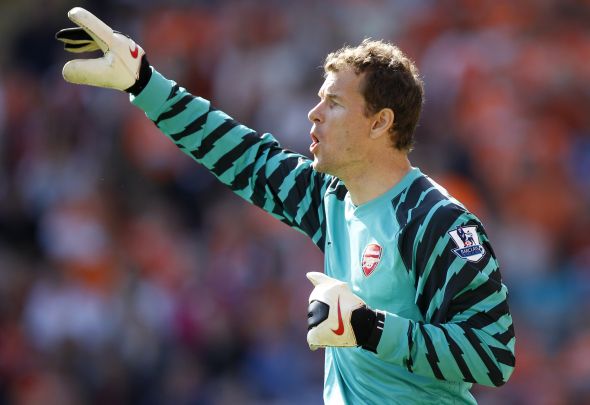 Jens Lehmann is adamant that Arsenal should keep Arsene Wenger at the helm despite their dismal 10-2 aggregate loss to Bayern Munich this week.

Doubts over the future of Wenger continue to arise after the eye-opening 5-1 defeat at the Emirates on Tuesday night, with the Frenchman’s current contract set to expire in June.

Speaking to Alan Brazil’s breakfast show on talkSPORT on Wednesday morning, Lehmann claimed Wenger needs to stay and must be backed in the summer transfer window.

“I think he has to stay now, because he’s done so much for the club,” Lehmann declared. “It’s very difficult to replace intelligence, and we all know he is a very intelligent man and manager and he’s still got the fire.

“He probably needs a bit more future with some new signings, and then next season could be a completely different situation.”

The Gunners’ recent woeful form, which has seen them win just twice in their last seven outings, has also seen them drop out of the Premier League’s top four.

The north London giants are currently in turmoil, with star striker Alexis Sanchez stating his desire to leave the Emirates Stadium in the summer according to the Daily Mail.

Wenger will be in the dugout next on Saturday, as he welcomes non-league Lincoln City to the Emirates this weekend in the quarter finals of the FA Cup.

In what is their best chance of achieving silverware this season, the Gunners will progress into the last four of the competition if they win, with the likes of of Tottenham, Chelsea and Man City still in the hat.

In other Arsenal news, QPR manager Ian Holloway believes this 28-year-old star is more to blame for the Gunners form than Wenger himself.