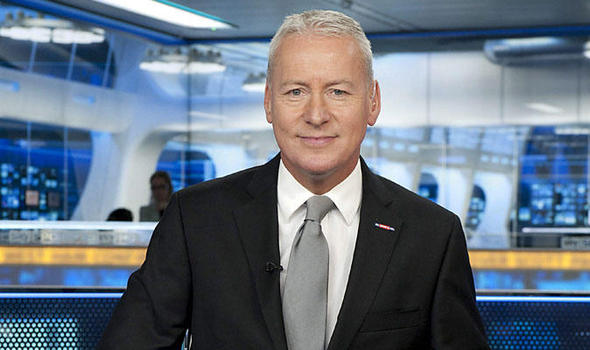 Jim White has slaughtered Scott Brown for his conduct during Celtic’s Old Firm win and claimed he doesn’t have the class of the club’s great captains.

The long-standing Hoops skipper was right at the centre of the action in Sunday’s derby as he was involved in the key flashpoints.

Brown first took an elbow to the face from Rangers ace Alfredo Morelos which saw the Colombian forward sent off, and was later flattened by Ryan Kent after James Forrest’s late winner, although the Liverpool loanee escaped punishment for the incident.

In the wake of the final whistle, Brown exchanged angry words with Andy Halliday after Brown appeared to be celebrating near the Rangers support.

Speaking on Brown’s performance, talkSPORT host White said: “It was the celebration after they won, and Rangers would have celebrated if they won, but he was celebrating very, very close to the small number of Rangers supporters who were allowed in.

“And that’s what led to Gerrard to say, ‘a lack of respect’. He (Brown) lacks respect and you expect more from a Celtic captain.

“I think of Celtic captains in the past, I think of Roy Aitken, of Billy McNeill, the best one ever. Brown doesn’t have it for me in terms of respect.

“He lured in Ryan Kent, who lost the plot, but he is 22 and Morelos is the same age. Brown has been around the block and he knows what he is doing.”

Was Brown well within his rights to wind up Morelos and Kent, two rising stars destined for the top, or did he act outside the boundaries of the spirit of the game? Certainly, his post-match conduct was fairly odious, as White points out. Celebrate by all means, but not right in front of the Rangers fans. Brown is long enough in the tooth to know what he was doing would enrage Bears and the Rangers players already dealing with the emotions of Old Firm defeat. White is right. Brown might be the talisman of the Celtic side that has domestically swept all before them over the last decade, but his behaviour on Sunday was beyond the pale. As for riling Morelos by kicking his heels, Brown targeted a player he knew does not have the self-control to ignore him. Yet, the Celtic skipper was perhaps fortunate not to have seen red for such an obvious wind-up tactic. It worked, and Brown can point to the result as proof of his methods, but he should not have to stoop so low. A Celtic captain should be classier than that.

In other Celtic news, the club are in pole position to sign a Rangers first team player.