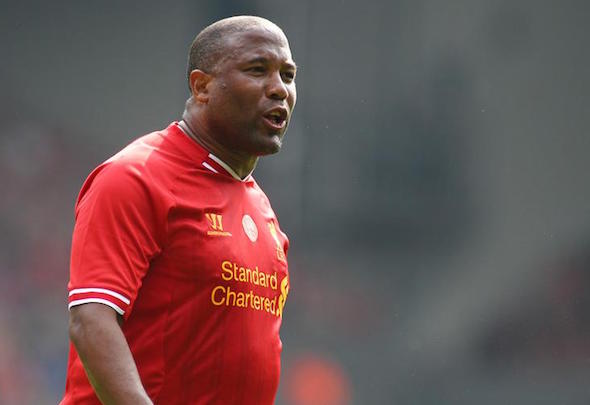 John Barnes believes that Liverpool should make some January signings to help their title challenge.

The Reds are currently second-placed in the Premier League and are just a point behind leaders Chelsea, who they beat 2-1 at Stamford Bridge in September.

The Merseyside club have been dealt a cruel blow as star player Philippe Coutinho has been sidelined until the new year, with the 24-year-old suffering ankle ligament damage.

His injury coincides with a busy December period as Jurgen Klopp’s side face six Premier League matches, but Manchester City are the only team from the league’s top six that they face.

Ex-Liverpool forward Barnes claims that the Reds should look to strengthen in the January transfer window as this could be their best opportunity to win the league.

“At the start if the season I don’t think they would have expected to be where they are, they were probably aiming [to challenge] next season,” Barnes told talkSPORT. “But considering they’re one point off the top coming towards January, why not just have a go now? Why wait?

“They’re a bit ahead of schedule, but let’s do it now. Don’t wait until the end of the season – this may be our opportunity.”

Liverpool have never won the Premier League and came agonisingly close in the 2013/14 season, but have emerged as serious contenders this campaign.

Jurgen Klopp’s side have been in impressive attacking form and their defence has begun to find some consistency in recent weeks with three consecutive clean sheets across all competitions.

Paul Merson has suggested that Liverpool could win the title if they sign centre-back Virgil Van Dijk, who is currently enjoying an excellent season for Southampton.

German manger Klopp could be tempted to improve the players in his squad as they compete for the domestic crown.

Chelsea travel to third-placed Manchester City on Saturday in the Premier League and Liverpool will hope to end the weekend back at the top if they can defeat Bournemouth.

In other Liverpool news, Jamie Carragher claims this player has been outstanding in his two starts.