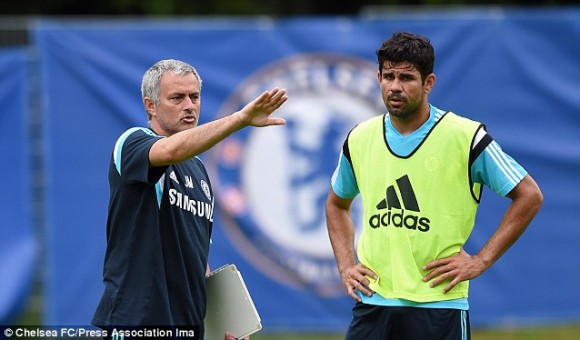 By Michael Cantillon
Jose Mourinho has claimed that Diego Costa is very often the victim in his physical exchanges with opponents.
Mourinho believes the striker’s body is being “punished” and has called on TV broadcasters and pundits to highlight the rough treatment he receives.
“He will be targeted until the moment people point the finger at them and show the images, re-show the images and have the top pundits speaking about it, ” said Mourinho.
“I would be even happier if the people that find his hypothetical or real negative moments, were honest the other way and show and show and show.”
Specifically speaking about Costa’s clash with Ashley Westwood in Chelsea’s 2-0 win over Aston Villa on Saturday, Mourinho said of the Spain international: “I’m pleased he didn’t react.
“The way he plays, the way he gives his body to the cause – because his body is always very punished – is brilliant. The team needs that.
“When we lose him we’re a bit in trouble because the team depends always on a striker like him, from a character, from a personality like him. So when we don’t have him, of course we miss him. We need him.”