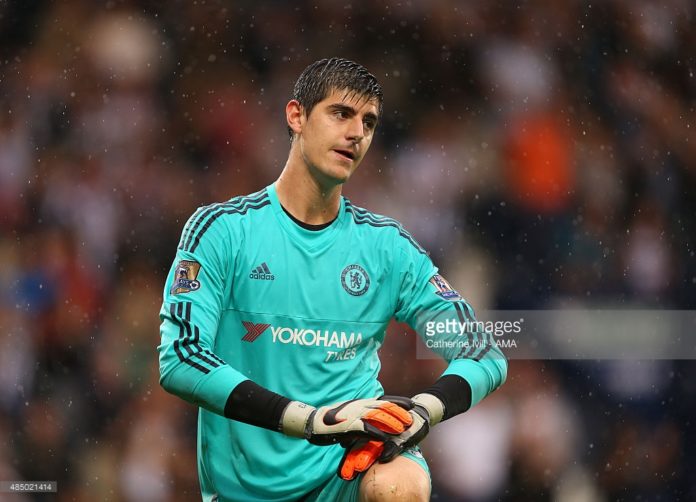 By Chelsea correspondent Tony Hughes
Jose Mourinho has admitted that Thibaut Courtois will undergo knee surgery and is expected to be out for “quite a long time”.
Football Insider revealed on Friday morning that the Chelsea goalkeeper had suffered a severe injury to his right knee that is feared will keep him out for three months.

Speaking at his weekly media briefing at noon on Friday, Mourinho addressed the issue of Courtois’ injury.
The Portugese said: “Thibaut Courtois was injured in training, he needs surgery on his right knee and he will be out for quite a long time.” The manager added it is a “big blow” to the Premier League champions.
Courtois broke down in training on Wednesday following his return from international duty.
The swelling on right knee initially prevented Chelsea medics from taking a scan to assess the full extent of the injury, but he has now seen a specialist and it has been decided that he will undergo surgery.
Sources have told Football Insider that Chelsea have learned the Courtois injury is severe enough to sideline the Belgium international for up to three months.
To lose his No1 goalkeeper is a huge blow to manager Jose Mourinho and comes in the wake of the team’s shaky start to the season, in which they have won just one of their first four league matches.
Asmir Begovic, who moved to Stamford Bridge from Stoke for £8million in the summer, will stand in for Courtois at Goodison Park and during the 23-year-old’s absence.
Begovic is a capable deputy but Courtois has established himself as one of the world’s outstanding goalkeepers both at Chelsea and at former club Atletico Madrid, where he had a very successful loan spell.