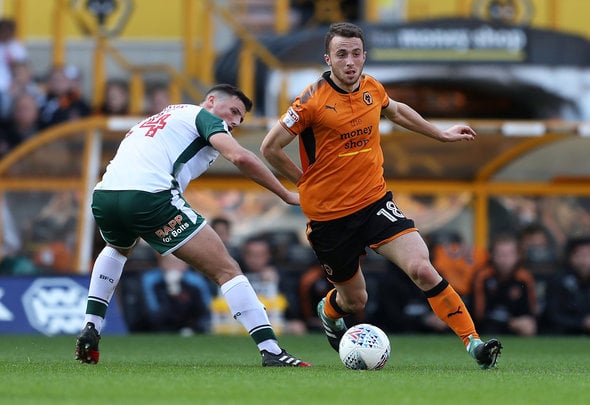 Wolverhampton Wanderers star forward Diogo Jota looks set to be ruled out of action for just three weeks after suffering an injury in the win over Reading on Tuesday, according to a journalist.

Freelance reporter Tim Nash, who was the long-term Wolves correspondent for the Express and Star, has claimed on his personal Twitter account that the 21-year-old winger has only suffered swelling to his ankle, a blow which forced him off after just 25 minutes in the 3-0 win over the Royals.

. @Wolves forward Diogo Jota is expected to be out for three weeks. He was forced off after injuring his right ankle in a clash with Reading midfielder Pelle Clement last night in Wolves' 3-0 win. Told it's just swelling rather than ligament damage.

There had been fears that the Portuguese attacker, who has scored 13 goals and chipped in with six assists in his 37 league appearances, had suffered ligament damage, which would have kept him on the sidelines for a significant length of time, but the swelling could keep him out for under a month.

It means he could be back for the away trip to Cardiff City on the 6th April, missing games against Burton Albion, Middlesbrough and Hull City.

While Wolves do have the talents to fill in for Jota, having him out of action for less time than feared will still be a huge boost for Nuno and his side. The league leaders can tighten their grip on the Championship title with every win they pick up and having the 21-year-old at their disposal would only increase their chances of picking up three points. Having him back for what could well be a title deciding clash against Cardiff City is massive, and he needs to focus on ensuring he is ready to return for that match, even if it means forgoing the game against Hull three days before.

In other Wolves news, the club must start one fringe star against Burton Albion.