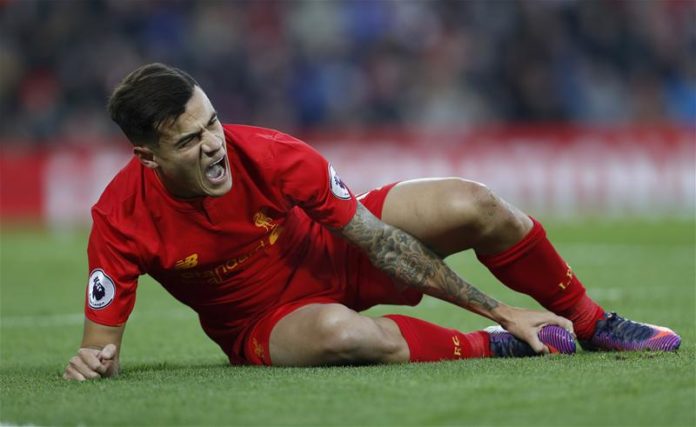 Jurgen Klopp revealed in Monday afternoon press conference that Coutinho was due to undergo a scan later in the day and Liverpool are hoping to imminently know more about the extent of the injury he picked up during their 2-0 victory against Sunderland.

The Brazilian was stretchered off and looked to be in a lot of pain after hurting his foot on Saturday so won’t be in the squad to face Leeds and initial reports suggests he could be out for up to six weeks.

Klopp, as quoted by This Is Anfield Twitter account, explained that Lallana is “close” to a return to full training after missing the last two matches but will not be back for Tuesday’s clash.

The England international has not featured in the last two games after picking up a hamstring injury while on duty for his country during the 2-2 draw against Spain earlier this month.

Klopp: "Phil's scan is this afternoon. Adam is in a very good way, close to team training, but not ready for the game."

Coutinho’s compatriot Firmino also picked up a slight knock during the win and Klopp confirmed he did not feature in training on Monday because his injury was still “painful” over the weekend.

Sturridge also missed training and won’t be in the squad on Tuesday due to a calf injury that kept him out of Saturday’s win against Sunderland.

Klopp: "Daniel is not in team training, and the same with Roberto. Yesterday was still painful. It's something we have to wait for."

Liverpool host Leeds at Anfield in the first meeting between the two sides since September 2009 when the Reds progressed through to the fourth round of the Carling Cup with a 1-0 victory.

In other Liverpool team news, Steven Gerrard has hailed the performance of his young cousin during England victory against Brazil.