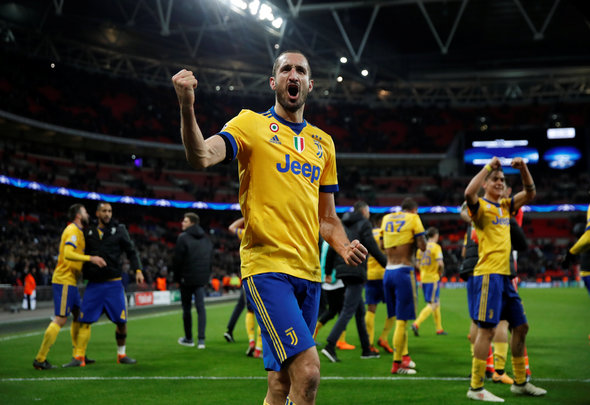 Juventus defender Giorgio Chiellini has torn into Tottenham for their inferior defence and weak mental state after picking up a 2-1 victory at Wembley on Wednesday and knocking Spurs out of the Champions League.

The Lilywhites returned to London with a 2-2 draw in Turin under their belt, knowing that they could take control of the tie with a goal, as well as needing to hold on to a 0-0 or 1-1 draw to progress to the next round of the competition.

After a bright opening for Spurs, their pressure finally paid off and it was Heung-min Son, off the back of a brace against Huddersfield over the weekend, who scored, converting from a Kieran Trippier cross.

However Juve managed to gain a foothold, and in the space of three second half minutes scored twice to turn the tie around and put them ahead on aggregate.

With no goals coming from Spurs before the final whistle, it was the Italians who progressed, and speaking after the game, Chiellini admitted they targeted the back line of Mauricio Pochettino’s men as a weakness, and knew they would not have the strength to compete if their heads dropped.

Speaking to ITV Football, via the personal Twitter account of reporter Gabriel Clarke, he said: “We knew Spurs were weak in defence and fragile mentally- experience told.”

Spurs’ next game sees them visit Bournemouth in the league on Sunday.

Chiellini’s words might come across as harsh, but it is also the reality of the situation. Spurs’ back line did struggle when put under real pressure and the likes of Trippier and Ben Davies will have to come under real scrutiny after playing a part in Juve’s goals. As for a mental weakness, many of the Tottenham players are inexperienced in big games like this, and the pressure may well have been too much to handle. It will act as a learning curve, albeit a steep one, and this disappointment may well push them on to future successes. Still, their European dream is over for another year, meaning full focus on their domestic campaign.

In other Tottenham news, Joey Barton has said one Spurs man was schooled by his opposite number against Juventus.