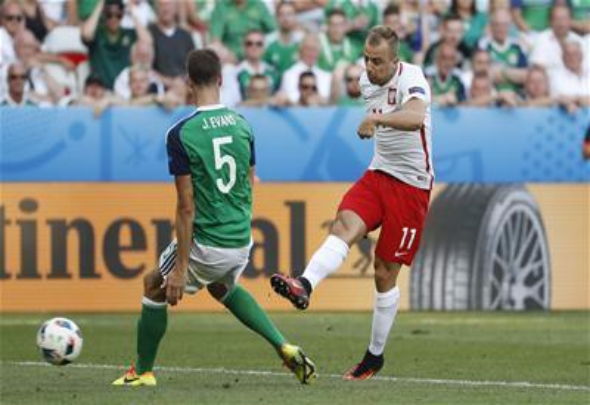 Everton are in advanced talks to sign Rennes winger Kamil Grosicki, according to reports

The report says that Grosicki’s agent flew to England on Tuesday to begin negotiations and that the club have already agreed personal terms with the former Legia Warsaw forward.

Grosicki has scored eight goals in 43 international appearances and notched nine goals and four assists this season for Rennes.

The Polish international is contracted to the club until 2020 so Koeman may have to match the French outfits £10million valuation of the player to secure his services.

Grosicki has played for six different teams since completing his youth career with Pogoń Szczecin but is currently focusing on his national team as he competes for Poland at this summer’s European Championships.

Grosicki will be keen to put all transfer distractions behind him as he prepares for a quarter-final showdown with Portugal on Thursday.

In other Everton news, former Manchester United winger Nani is set to snub the Toffees in favour of a move to Spain after just one season in Turkey.