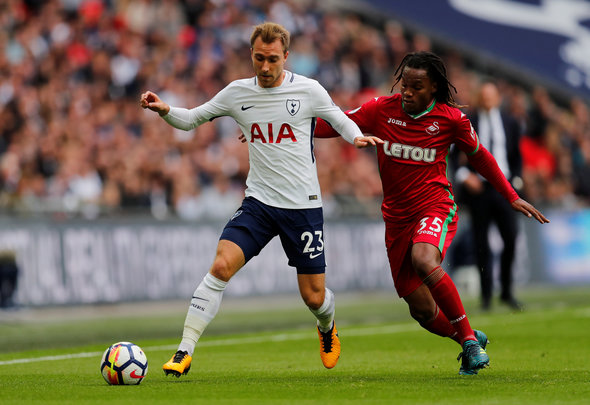 Former Arsenal star Martin Keown has named Tottenham playmaker Christian Eriksen as the true dangerman that the Gunners need to fear in Saturday’s north London derby.
The fierce rivals go head to head in a lunchtime kick off, knowing that as well as bragging rights, victory would be a major boost in securing a top four spot this season, while defeat would put a huge dent in their hopes.
Arsenal picked up victory in the reverse fixture back in November, with Shkodran Mustafi and the now-departed Alexis Sanchez netting to secure a 2-0 win at the Emirates Stadium.
As such, Spurs will be looking to exact revenge over their near neighbours, but despite the sensational goal scoring exploits of Harry Kane, with 31 goals in 32 appearances across all competitions this season, Keown says that Eriksen is the man that Arsenal should be worried about coming up against.
He wrote on his live blog (08/02, 13:06) on the Daily Mail’s website: “Christian Eriksen is looking like the real deal. There is a cutting edge and venom to his play. He could well be the match-winner this weekend.
“We talk about Arsenal paying close attention to Harry Kane and Dele Alli but Eriksen can profit from any space that Arsene Wenger’s side afford Spurs. He has the tools to thunder in a shot or curl one in.
“Eriksen is a slow burner but this season he is reaching new levels.”
Eriksen has a total of 31 appearances under his belt this season, with eight goals and eight assists to his name, and he featured for the last half an hour in the club’s 2-0 win over Newport County in midweek.
In other Tottenham news, Mauricio Pochettino has branded one man a “genius” for his role in their improved form.