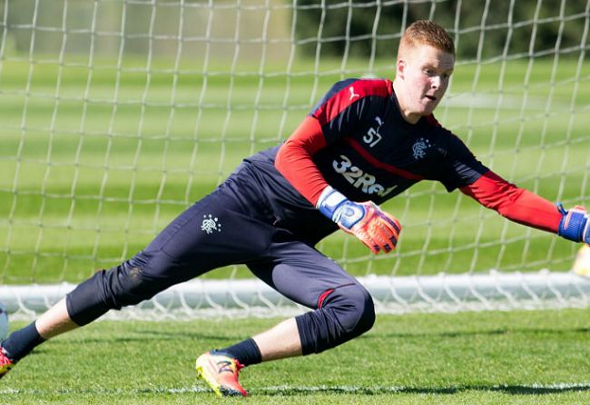 Rangers goalkeeper Kieran Wright has revealed former Gers defender Ross Perry has been a “big help” in helping him settle on loan with League One Albion Rovers.
Wright is on a season-long loan with Brian Kerr’s side as the young goalkeeper gets his first taste of regular first-team football in the senior game
The Scottish youth international has forced his way into the number one spot and is hoping to use his spell at Cliftonhill to push his way up the pecking order at Ibrox as he competes with the likes of Robby McCrorie and Aidan McAdams to move up to the first-team squad.
Wright admitted League One is “tougher” than people think and singled out Perry and captain Gary Fisher for helping him settle with the Coatbridge side.
“I get on well with the guys in the dressing room, they are a good bunch,” Wright told the Airdrie & Coatbridge Advertiser as quoted by the Daily Record.
“I knew Ross from when he was at Rangers. He’s been there so knows what it’s like. Gary Fisher as well has been a big help.
“It’s a tougher level than people might think and having guys with experience around you really helps.”
Despite being out on loan, Wright is regularly at the Gers’ Auchenhowie training base working with the Light Blues first-team thanks to Albion Rovers’ part-time status.
The 18-year-old is a regular in the Scotland Under-19 squad and will be hoping his recent performances for Rovers earn him a place in the squad for next month’s European Championship qualifiers.
Rovers currently sit eighth in League One and face a relegation battle with Forfar and Queen’s Park to avoid dropping into the bottom tier of the senior set-up.
In other Rangers news, it can be revealed that a key first teamer has sensationally asked to leave after the board failed to stick to their promise of giving him a new deal during the transfer window.
Don’t miss out on breaking and exclusive Rangers news by clicking here for our brilliant 24/7 updates on Facebook, Instagram and YouTube.