Noel Whelan claims that the Leeds United midfield is Marcelo Bielsa’s only selection dilemma ahead of the Whites’ visit to Cardiff this weekend.

The former Leeds striker, speaking exclusively to Football Insider assistant editor Russell Edge, has named 10 players he believes are nailed on for a place in the starting XI this weekend.

Speaking to the media on Thursday, Bielsa confirmed that Pablo Hernandez, Jean-Kevin Augustin and Adam Forshaw would all be missing as a result of injury for Sunday’s showdown in Wales.

Hernandez started the Whites’ last game against Huddersfield, with the 2-0 win played over three months ago

Whelan believes that finding a replacement for the Spaniard will be the only issue for Bielsa ahead of Leeds’ return to action.

With Illan Meslier almost guaranteed to start in goal, Whelan told Football Insider: “I don’t think Marcelo Bielsa’s style is changing too much about the side, especially when we’re on a winning run of five games.

“He will go back to the tried and trusted which is his usual back four of Luke Ayling on the right, Stuart Dallas on the left, Liam Cooper and Ben White, the main two centre-halves together – great rapport already we’ve seen this season, leaders at the heart of the defence.

“Jack Harrison’s been fantastic on the left, on the right-hand side you’re looking at Helder Costa, who is coming into the game that you expect – he’s still flirting and out of the game but we do know that on his day, that pace, little bit of trickery and direct style he has can cause anybody problems on their day.

“Kalvin Phillips sitting in that (midfield) area, then you’ve got the dilemma of where you play Mateusz Klich, are you going to have him alongside and it going to be Tyler Roberts in the number 10, that more forward-thinking kind of player? Even Mateusz Klich can play that role. 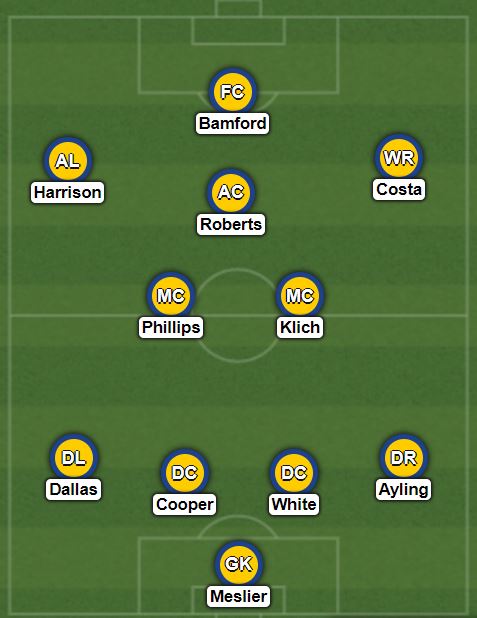 “Up front it’s Patrick – he’s you’re number nine, your striker, your main man – the dilemma of playing Patrick Bamford or Tyler Roberts is not going to come into the equation, I wouldn’t have thought.

“Patrick is definitely taking that role but there might be room for Tyler as well which makes us a little bit more attacking.”

In other Leeds United news, Danny Mills claims that Patrick Bamford is set to plummet down the pecking order at Elland Road.